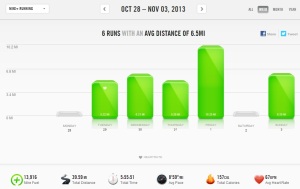 Week 16 is now complete. There are less than 2 more weeks to go to the Philadelphia Marathon.

I’ve really enjoyed my training for this year’s Philadelphia Marathon. Maybe it is because I’ve done this a few times now but coming off the feeling I had after this year’s New Jersey Marathon in May I have put a lot less pressure on myself and set out to enjoy this race.

My overall training mileage was about 10 miles less this week. I did manage to get out and cross train on Monday and luckily I took my workout indoors as this was the only day that rain would have impacted the workout.

The Tuesday through Thursday runs felt good and were uneventful (which is what you want at this stage in the training). It was a little foggy and cold (I was wearing my winter gear again) but it started to warm up on Thursday and was actually near 70 when we went out Trick or Treating with our kids on Thursday evening.

This weekend I was supposed to rest on Friday, do a 4 mile pace run on Saturday and an easy 12 mile run on Sunday. Of course our weekend plans did not allow for such a schedule but I moved my week to match the mileage and accommodate a race.

On Friday I ran (in t-shirt and shorts no less) a nice 10 mile run early before work. I needed to get this workout in as Saturday we were heading to Hershey Park with the boys.  On Sunday I had the Benjamin Franklin Bridge 10K run which I decided would be a goal PR race (which I accomplished in 49:09). I will be doing a separate race recap for this.

One thing I have done everyday since I started my journey back in August 2010 is to record my calorie intake. Can you guess which day this week I went to Hershey Park which included a slight detour to Hershey’s Chocolate World? 🙂

Hmmm….which day was I at Hershey’s Chocolate World?

The race was a great finish to a great week of running. I ran hard and felt good. Week 16 is done and now we continue the taper to week 17 which includes the upcoming Trenton Half Marathon.

Here is the countdown:

1 week until the Trenton Half Marathon

2 weeks until the Philadelphia Marathon

9.5 weeks until the Dopey Challenge (the event starts on a Thursday so I revised the countdown)