Beep…Beep…Beep…yup, that was the sound at 2am (not that I hadn’t woken up just before my alarm to make sure I didn’t miss the alarm).

Having set out all my gear and pinned my Goofy bib to my race shirt the night before I got myself up and prepared. There is nothing like getting up at 2am and putting on sunscreen, eating a Power Bar and drinking Powerade Zero to start your day. It was an extra early start today as I was going to the race this morning with my sister in law Rina who was running her very first Half Marathon. I did the gentlemanly thing and got up earlier so she could have an extra 30 minutes sleep and get out of the bathroom so she had time to get ready. Anyway, we were out the door and headed to the car 3:15 (a little earlier than planned).

It was a little foggy as we got closer to the park but at least I didn’t miss the exit today. We got there about 3:45 in a good parking spot not too far from the start line entry and immediately got in lines for the port-a-potties (as you do), took a few pictures and headed to bag check. Once through we again hit the bathrooms just as they started calling the runners to the corrals.

Rina and I arriving at the Half Marathon staging area.

Wow….it took forever or at least it seemed like that to get to the corrals. I don’t remember it being as busy last year although I remember the longish walk to the start line. We just couldn’t get beyond the bag check/bathroom area for so long. It was funny though as we were listening to everyone’s conversation of past Disney races or talking about their first race nerves. We overheard a guy talking about preparing for the Goofy Challenge and giving advice to a fellow runner doing his first Goofy. I listened as he advised that after the race he went back to his hotel room, took and ice bath and then sat with his legs up to the wall at a 90 degree angle to rid him of lactic acid. Then he planned to rest until 4pm and have an early dinner….you mean you are not supposed to head straight out to Hollywood Studios after the race? Umm…

As we walked along to the corrals Rina and I chatted until we had to split into our respective corrals. Luckily she met up with some other first timers and I left her in their care. So much for us having to be in the corrals by 5am…I didn’t make it there until 5.20am just as they sang the National Anthem. I jumped into the corral and waiting for corral B to be called to the start line. I recognized Lee Hoedl (the guy who makes those awesome videos) and we took a quick picture together. I had made a conscious decision to enjoy myself this weekend so I took my iPhone with me and was ready to take the run easy and stop and take pictures. I did take a few pictures during the Marathon last year but I was still looking at a time as that had been my second marathon. As I was doing the Goofy for charity this year I decided to just enjoy myself and make sure I made it to the finish line on Sunday.

The fireworks went off and we made our way across the start line. Within the first 100 yards or so it was “Uh oh…hello right knee. Thanks for turning up”. Oh boy…only 39.2 miles to go! I went easy, this was not a day to PR anyway so may as well make it as enjoyable as possible.

I don’t know how to describe the feeling of running up Main Street USA with all the lights and seeing Cinderella Castle all aglow without telling you you have to be there for yourself. It’s magical when you visit the park but it is even more special and I would say emotional while you are running there as the adrenaline and excitement of entering the park is so different from a regular visit (no fiddling with tickets, going through security or pushing a stroller). The noise of the crowd contributes to the whole experience. Last year I ran through the park and stopped for a picture in front of the castle. This year I made sure to stop and take pictures and soak up the atmosphere. Truly magical.

Main Street USA in all its glory during the Half Marathon

After running through the Magic Kingdom the course takes you back to EPCOT. There is not too much to see once you leave the Magic Kingdom and it does get a bit narrow along the course in places. I made sure I got my photo with Mary Poppins this year. I didn’t have my camera last year and this was one photo I was sorry to have missed in 2012. The runDisney folks do a great job in keeping you entertained with music and character stops. I made sure that I saw the TeamUp cheering squad just after mile 7.

The sun was coming up and we all followed the herd up the overhead ramps on our way back into EPCOT. With very few character stops on the way back I could start to settle into a consistent mile pace. Around mile 10 I finally had to stop at a med tent and enjoy some of the complimentary BioFreeze which finally began to work its magic as I approached the 11 mile mark. Once all was working right again (or at least I couldn’t feel it wasn’t working right) I picked up the pace. I stopped one more time to take a picture with Phineus and Ferb before high tailing it into EPCOT. My legs felt fine so I thought I could run in….which I did only to feel something tweak in my right foot. I made it across the finish line and received my Donald medal and taking advice from some of the blogs I had read, headed over to the self-treatment area to apply some ice to all the achy bits for 20-30 minutes as I waited to meet up with my sister-in-law Rina.

Aaaaaahh. That feels so good.

Once through the bag check I sat on my runDisney mylar blanket and used my foam roller stick on my legs, ate and drank and just chilled out in the shade of the tent and followed Rina’s progress on Facebook. When Rina came through the bag check she was clearly very emotional having completed her first Half Marathon. She looked so happy (and relieved) and I was so proud of her. Once we both calmed down a bit we headed back to the hotel to shower and change and then we all set off for Hollywood Studios. 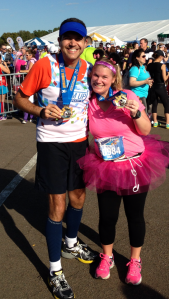 We did it. Well done Rina

At Hollywood Studios we had a character dine booked at Hollywood & Vine. It was with the Disney Junior characters which my boys both loved. We ate there after the Half last year and I remember it was a great place to re-carb. I think I ate my body weight in mac and cheese. It was so tasty although I made sure to leave room for dessert (two portions). This gluttony probably is the reason I fell asleep during the Handy Manny section of the Disney Junior show… the 2am wake up probably also helped.

First round of dessert…I needed carbs

We chose Hollywood Studios as our Saturday park as we knew we would be hitting the parks but this had an earlier closing time than the others so we tried to plan appropriately. We were still there at the close of the park too. I knew I had to eat a little before heading to bed but didn’t want another huge meal after my lunch adventures so we ended up grabbing some bakery items including the giant Mickey peanut butter cookie you see in the picture below…hey, doing the Goofy Challenge any carbs are good carbs. Before we left the park for the night Shari had been shopping and had bought a completely different outfit to run in for tomorrow’s Full Marathon. Either way tomorrow would be an exciting day for all of us.

I got all my race gear ready for tomorrow’s marathon. Some random guy (who I would like to thank) handed me a strip of ring reinforcers to put on my bib. I hadn’t seen or used them since university and it had not crossed my mind that someone would think about handing them out but it was great as we had to re-use the Goofy bib on consecutive days. A life saver for sure. A quick load of laundry after the half and I had my outfit for the morning. I cannot believe I packed for cool weather before I came to Florida. What a waste of luggage space 😉

Shari told me that once my head hit the pillow that night (probably sometime around 10pm) I was out like a light. Never ever happens to me but I’ll take it when I need it.