Okay, so I know this is late June as I write, but May is still technically last month so I’m squeezing in a late ‘Month in review’ (you’ll understand why below).

At the beginning of the month my wife and I ran the 2016 New Jersey Marathon. You can see the distance recorded at the start of the monthly summary. What you see after that is a long gap of 9 days between runs and a total of just under 84 miles run in the month. I shall explain shortly. As you can see from my Garmin data below (where I record all activities swim/bike/run) I covered a total of 288 miles (8 miles swimming, 196 miles on the bike and 84 miles running) as my focus after the marathon was on training for my half iron distance triathlon in July. 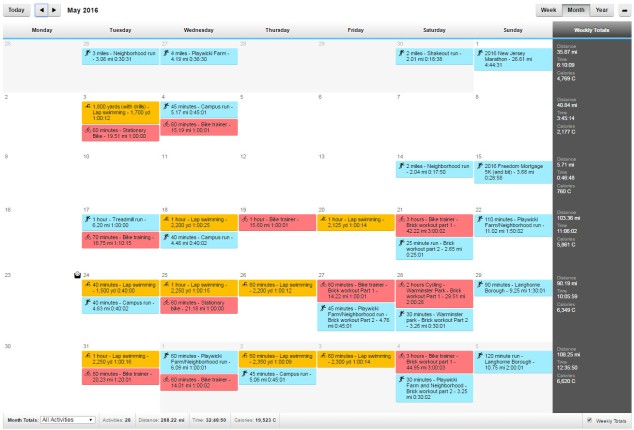 As I mentioned in the review of the 2016 New Jersey Marathon, it was a very wet and cold day. After the race I came down with a cold and a bad sinus infection which resulted in a nice expensive journey to the Minute Clinic early on a Sunday morning to get a prescription for some antibiotics. In addition to this, I had a pretty bad cough which led to some sore chest and back muscles. I took a few days of rest to help everything clear up. I thought I was doing okay so I got up on the morning of the 10th to do a bike workout and as I bent over to put on my bike cleats I threw my back out. Ouch….a long crawl back to bed where I was laid flat on my back for two days with a strained sacroiliac joint. That kind of put a damper on all the triathlon training I had planned.

I ended up missing almost two weeks of my training plan and was getting a little concerned as I haven’t gone beyond a sprint triathlon before. Multiple trips to the chiropractor over a series of a few days, lots of ice and heat treatment and I started to loosen up. My wife was the race director for an inaugural 5K for her company and we had been the first to sign up. I was a little concerned about running still so I took an easy 2 mile run the day before to see if all was okay. Thankfully it was. No sign of any recurrence. I was feeling good going into the race.

The morning of the 5K my wife left early to set up so I headed down with my Father-in-law and the boys. My Father-in-law and I were running the 5K and the boys were running in the 1 mile run which took place after the 5K had completed. We got to Cooper River Park early and my boys went straight to the post race refreshment table. I don’t even want to know how many donuts they ate while I was getting everyone’s bibs for the race. I was still a little concerned about my back but the park looked pretty flat so I thought I would see what kind of pace I could maintain as I don’t run many shorter distance races these days. 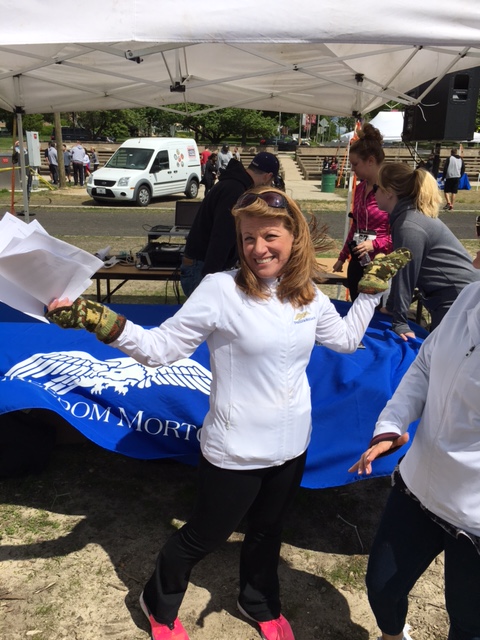 I actually ended up running a very decent pace (although the race was actually more than a half mile longer than a 5K). I ended up 10th overall and placed 3rd in my age group with a sub 8 minute pace. Pretty happy considering that I was laid flat on my back a few days earlier.

Good enough for 3rd place in my age group. 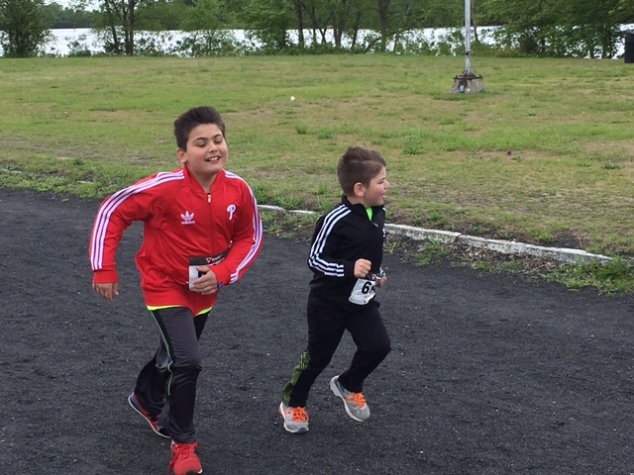 Proud parent moment. The Heir and the Spare running the 1 Mile Fun Run 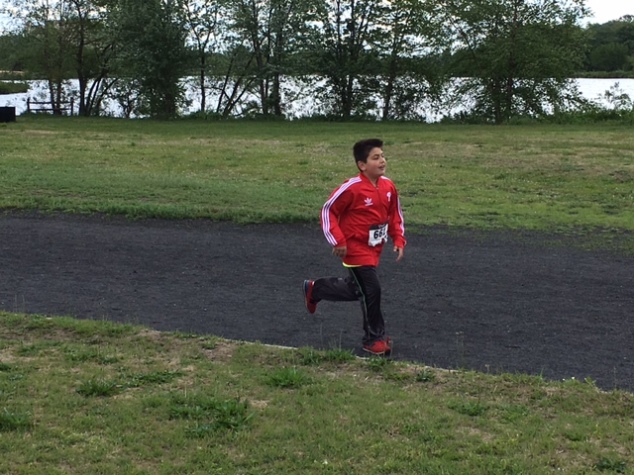 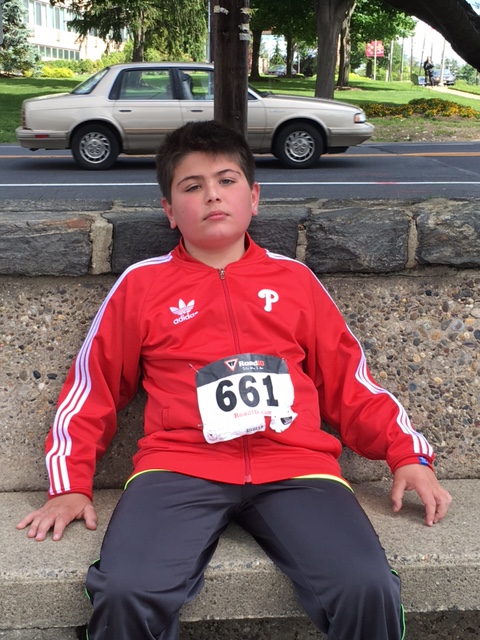 My eldest however didn’t realize how many laps made up the mile distance. It took him a few minutes to recover.

With the boys new-found excitement for running we decided to do what we could to encourage them to do some more. I signed both boys up for another 1 mile fun run on July 4th (the Washington Crossing Revolutionary Run which I ran last year) and I also signed them up for the new Disney Shorts Virtual 5K. We plan to train with them all summer and run the actual 5K when we are on vacation in Myrtle Beach in late August. I will give them their medals and they can wear them around the beach resort.

We took the boys out to run along the Delaware Canal Towpath over the Memorial Day weekend which was a lot of fun. Hot, but fun. As we did when we ran with them in the stroller together, we started and finished outside of our favorite bakery so there was some incentive to their efforts. 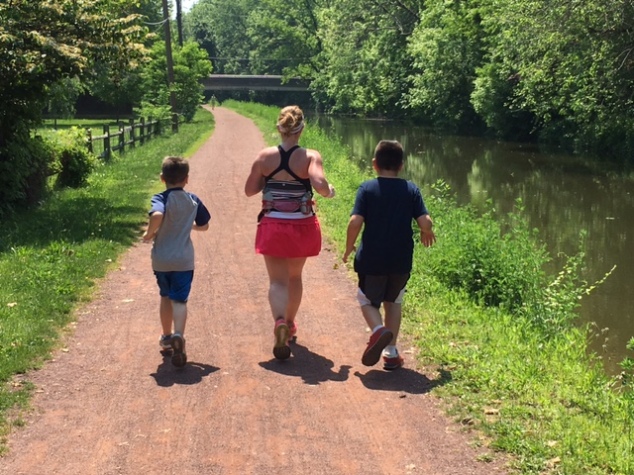 Running south on the canal on our first outing.

Running north on the canal on our second outing. 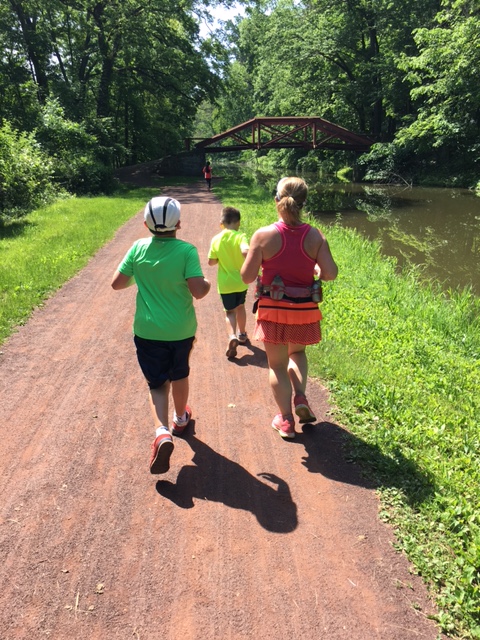 Running back to the bakery on our second outing.

Now that I was feeling back to normal it was headfirst into the triathlon training. I’ve trained many times for marathons but this was a whole lot different and much more intense. I guess it’s the daily double workouts typically about an hour each which is the main difference. I am doing my second workouts sometimes after the boys are in bed and it is pretty late for someone like me who is usually an early bird when it comes to training.

The biking and running brick workouts on Saturday are typically more time than I spend exercising especially when I still have my long runs to do on Sundays. It is worth it to achieve my goals but it is exhausting. I’m sure it will all pay off as I have put in a lot of effort to try not to miss any scheduled workouts. I am feeling much better with my swim. I still have my concerns about the bike but I am at least feeling a little more comfortable in the saddle. You can see from the summary below how much time I am putting into this.

And  how early I am getting up to do these workouts (from my Fitbit sleep tracking).

With all this extra training, it does build confidence. I am feeling stronger in the pool and I’m actually enjoying and looking forward to my swim sessions. The bike, I’m still ‘eh’ for now but hopefully I’ll be more comfortable as my training progresses in June.

Thanks for taking the time to read. Apologies for the late write-up. As I said when I began, technically it is still last month so I’m getting in before the SAG wagon creeps up on me.