With only a couple of weeks left of my training for the 2014 Dopey Challenge I’m getting the final couple of weeks of the training plan completed in which ever way I can. I was fortunate enough to be out of town during the snow storms that hit the North East a couple of weeks ago. When we arrived home we had to dig our way back into our house and had to deal with lots of ice over the next few days. As a result I had to take some of this training indoor to the treadmill.

On Tuesday I had to brush snow off my car on the way to the gym and leaving the gym. Being dressed in short shorts is not advisable to be doing this. Lesson learned. Brrrr…. Although the snow passed by Tuesday evening it was still pretty cold out there and having to run in the pre-dawn hours didn’t make it safe to be outdoors with black ice on the streets. Having run most of this year outdoors it felt a little weird running on the treadmill for three days in a row. Actually it felt a little uncomfortable and if anything I was more sore from three days on the treadmill than running the previous week’s ‘mini Dopey’ of 40+ mile on the open roads. Sometimes it felt like I was fighting the treadmill to maintain balance unnaturally which made my ankles sore.

By the weekend it was getting a little warmer and with the ability to wait until the sun came up to get outdoors I decided to run my 6 miler on Saturday outside. I said it was warmer, that doesn’t mean all the ice had melted in some of the shaded areas of our local park. I had set out to do a marathon pace (or close to) run as per the training program. The first mile went fine and I was at about mile 1.5 when I hit the ice for the first time. I looked like an Olympic figure skater except with a look of panic on my face. Black ice will slow your run down considerably. I had to walk certain parts of the route until it was safe to run again. My sub 9 minute miles went to at more than 10 minute miles on average and I finished my 6 miler in over an hour. The pace run was not to be.

On Sunday I had a 12 miler scheduled and was debating where to take the run. We were fortunate that our in-laws offered (or were persuaded) to take our two boys on a sleepover on Saturday night so my wife and I decided we would both run together seeing as we had a chance. We decided to take it to Tyler Park, while hilly it would be less wet underfoot due to the natural draining of the landscape. On our way to the park the heavens opened into a massive rain shower. Oh no! Luckily by the time we reached the park it had pretty much passed although our first mile was in some light rain.

It was Sunday December 22nd, the second day of winter and the temperatures were in the mid 60s for our run. I was out in a t-shirt and shorts. This was crazy. Less than a few days before it was snowing, the previous day it was icy and now I was running in somewhat humid but warm weather in summer running gear after the official start of winter. Crazy. Needless to say we took full advantage of this and had a very enjoyable and even chatty run (though that me be in part because my wife’s earbuds had broken!). 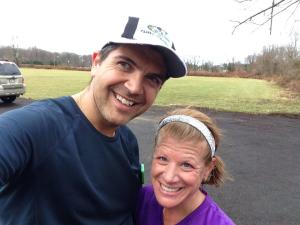 With two weeks to go of my training plan for Dopey I know that I probably will be dealing with some cooler, if not colder, weather. Hopefully with the holidays coming up I can take some extra time to run in the daylight this week. I have one long run week left and then one week of taper before I head to Florida. Based upon my training plan I may hit 1,750 miles of running for the year by 12/31/13. Another new milestone and one perhaps to beat next year. We’ll see 🙂