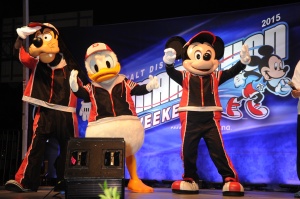 This year my wife and I were running the Goofy Challenge (39.3 miles over two days) for Autism Speaks. Last year I ran the Dopey Challenge (48.6 miles over fours) but wised up and ‘only’ signed up for the Goofy. Actually the big difference was that we were able to travel down as a family this year. The first couple of days of the week I was following my friends who were running the Dopey Challenge and were already down in Orlando. I was getting antsy.

Thursday evening finally rolled around and we set off from the Philadelphia airport on time. I think I was more excited than my boys about going to Walt Disney World (as always). We were traveling down with my sister-in-law and her husband who were running the half marathon this year.

On board our flight and ready to go.

Okay, so maybe my youngest looks a little more excited.

After settling into our hotel and getting a few hours sleep (more than we would be for the next two days) we got up early and headed over to the race expo. I was planning to wear the charity gear for the half marathon and our ‘costumes’ for the full marathon so I wore my ‘Mickey Milers‘ shirt to attend the expo. I also had my Mickey Milers button on my jacket so I could meet or catch up with fellow team mates.

The expo was held as in prior years at the ESPN Wild World of Sports. The bib pick up was in the HP Field House. The Goofy and Dopey bib pick up was upstairs while the half marathon and full marathon were downstairs.

Arriving at the Expo

Not too busy at pick up 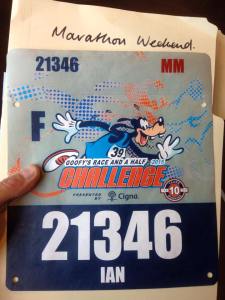 Very excited to have this in my hands again

While picking up the bibs we were handed our race shirts. I actually selected a smaller size this year at registration and that worked out well. The race shirts were really nice. The Goofy shirt would be useful in case of being stranded on an island…it was BRIGHT orange. I like the changes that they made to the race shirts last year and they kept them for this year too. Very nice and soft to the touch. 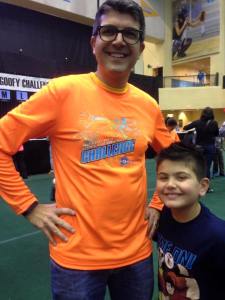 Trying on the Goofy shirt for size

While we were there we bumped in my friend and fellow INKnBURN Ambassador Jill who started talking to my wife about the special runDisney shoes. Hmmm…

There was a little merchandise in the Field House but I don’t recall that it was open at the time we arrived so we rejoined my sister-in-law and her husband and headed over to the Jostens Center for the main expo. There were also some stand alone booths outside near the stadium but it was cool outside (it had been raining) and we knew most of the stuff we wanted would be inside.

One thing that was different this year was the new rule that anyone running one of the runDisney challenges during the weekend (Goofy and Dopey) had to have their picture taken with their bib. This was to replace the wristband system that was in place last year to prove that you have completed each race.

They’re watching your every move!!!

As we entered we put into effect our plan to keep the boys occupied so we could all browse the expo. My wife and I use our old iPhones as iPods for our boys and so they have some games/apps/movies to keep them occupied. We chose a corner of the expo where they could see us and where we could see them. Everyone was happy.

The expo was set up like previous years and we hit the official runDisney merchandise section. It was set out in aisles by races with each race having some unique merchandise vs other races (e.g. jackets vs fleeces). After grabbing our car magnets we looked around for a while. We didn’t do too much damage this year. How much can you really buy these days having done these races for the last few years. Not much other than the year and color changes on some products. Still, some nice stuff. The character hats were unique though but not really runDisney as we did say some for sale in the parks later. I did notice that the ‘I Did It’ shirts were cotton this year and not the tech like last year. I had planned on purchasing one of those but skipped as a result.

Expo was spaciously laid out and not too crowded

Did most of our shopping down this aisle

The Mickey hats were fun. They also had Donald and Goofy variants. 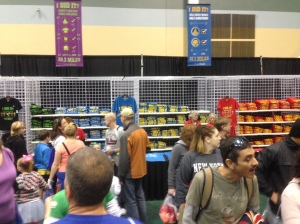 The ‘I Did It’ shirts area

Check out was quick and easy. We didn’t spend too much time there as we wanted to have a quick walk through the expo and we had Fast Passes waiting for us at EPCOT.

We did stop by to say hello and meet up with Jeff Galloway. Without Jeff’s training methods both Shari and I wouldn’t be multiple marathoners. We got a chance to have a quick chat with him. He is so approachable and encouraging. 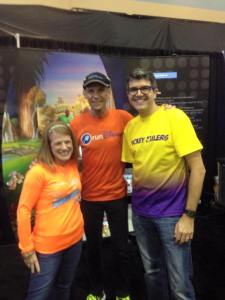 A quick family stop at the expo for some Goofy fun

Walking around the expo we saw the regular attendees. We didn’t go there needing anything so planned to walk around and see if there would be something unique. There were a few nice runDisney specific shirts at the Champion booth but there weren’t any left in my size by the time we got there. My wife however picked up a few ‘Sweaty Bands‘ including her runDisney branded band and I picked up a pair of arm sleeves by 2XU. My wife was intrigued by the runDisney shoes following our conversation with Jill earlier. While the New Balance runDisney process for getting these shoes includes pre-registering for an appointment (which we didn’t do) my wife is, how do I say it, umm…on the smaller size. Jill and Shari were of a similar height and Jill told her that she might be able to fit into the youth sizes for which there was no pre-sign up required. We headed over and before you knew it I was shelling out for some of the pink polka dot Minnie Mouse shoes (from the 2014 range). 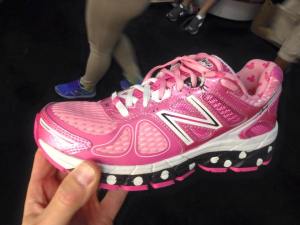 Very happy with our purchase

They also had on display the new ‘retro’ “Steamboat Willie” 2015 runDisney shoes. They didn’t really do much for me and for the price of $185 they were a bit of a surprise compared to the 2014 colorful ones. 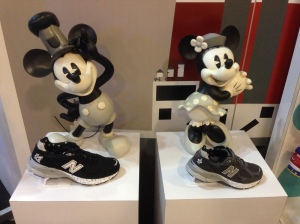 They were still selling the 2014 New Balance runDisney editions

As I was waiting for everyone to wrap up their time at the expo I bumped into and said a quick hello to Runner’s World Chief Running Officer Bart Yasso. 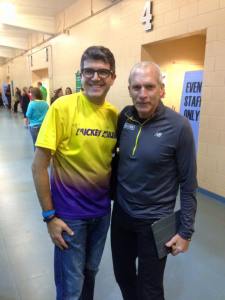 A quick hello with Bart Yasso

So having left the expo we headed over to EPCOT. We planned to spend the day there as the team dinner for Team Up – Autism Speaks was planned for that evening at the Living Seas Pavillion. It had been raining when we arrived at the expo but had dried up but it was far from warm. My wife was already wearing her Goofy race jersey (I gave her the stink eye because I’m in the ‘don’t wear your race shirt before or during the race’ camp). As you can see, it was a little cold (ok…we may be exaggerating a little!)

As you can see we were a little bit cold….brrrrr…

After some time in the front of the park (yeah for Soarin’) and a quick trip around World Showcase with the boys we were all set to meet up with everyone for the dinner at the Team Up dinner. I did make a small purchase in the American Pavilion. My wife is a big fan of the Alex and Ani bracelets and they have a Disney line (of which I’ve already invested quite a bit). In the store they had a ‘Goofy’ charm which I bought as another keepsake to celebrate her ‘first’ Goofy Challenge.

Not to be worn until Sunday after finishing the marathon

We met up with everyone outside the Living Seas Pavilion at the front of the park before heading into the ‘Living Seas Salon’ banquet suite on the other side of aquarium. I had changed into my One More Mile custom Goofy shirt that I had made up for my first Goofy when I ran for Team Up back in 2013. 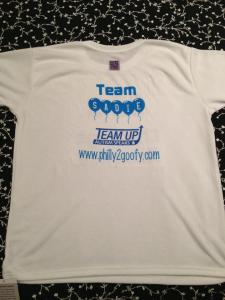 Dinner was hosted by Phillip, the National Director for Team Up and was a nice pasta buffet and dessert dinner. I think there were about 80 runners for this years team and at the date of the dinner we had raised over $163,000 for this event. While at the dinner there were a number of speakers sharing the stories of why they run for Autism Speaks. Some of the stories were amazing. Very inspiring evening. While the speakers were talking our boys were off in a corner making signs for us for the next day and generally enjoying the views of the aquarium. 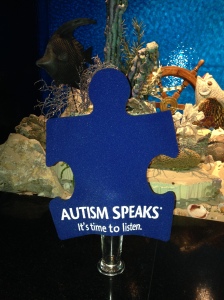 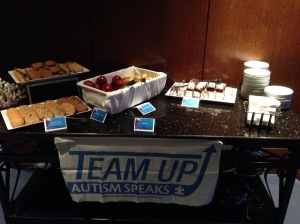 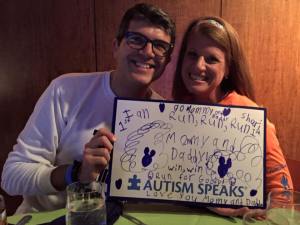 After dinner it was a quick ride on Spaceship Earth, Illuminations fireworks and then heading back to our hotel for the first early wake up call (2:00am) for the half marathon.