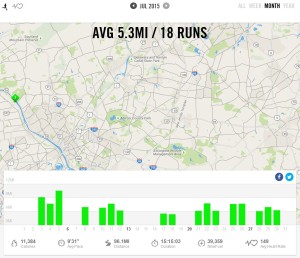 As has been the case for the last couple of months I have been running less but working out more. With my goal of completing a triathlon this year I really have had to work hard on my other sports (basically just swimming). So even though I have been running approximately 50% less compared to the same month a year ago I am actually working out more. 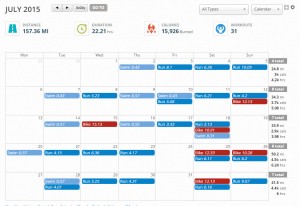 Looking at my Map My Fitness log which includes both swimming and riding I reached a total of 157 miles for the month which is 4.43 miles of swimming, 60.78 miles of riding (both indoor and outdoor) and 92.15 miles of running.

We got back from our trip to England on July 1st and my back was a mess. I could barely sit up straight or sit still. Did I rest? Kind of, but not enough. I saw the chiropractor 3 times in the first few days back…yet still managed to register and sign up for a race much to my better judgement. I even ran a fairly decent time for me during the Washington Crossing Revolutionary Run 10K on July 4th. 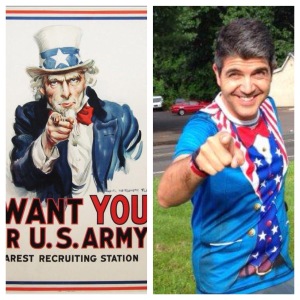 A little fun on July 4th

Finally I decided to heed some advice and I went for a sports massage the following week. Wow!!! Ouch…but wow!!! I could actually touch my toes again when I left and within a day or so I was pain free. Amazing. I guess it was all the tight muscles pulling me out of alignment. Either way…I felt much better.

Anyway, the weekend of the triathlon came and went. I’m not going to recap the whole thing again here but you can read the full report from the New Jersey Triathlon here. Long story short there was a lightning storm and the race was cancelled in the middle of the event. I had completed the swim but was called off my bicycle just under half a mile from the end of the ride. It was not to be. 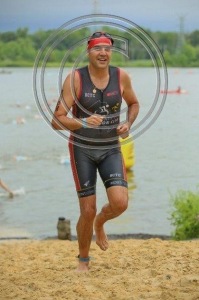 I was both disappointed but also happy. I had been very nervous about the swim but it went great. My only disappointment was that I wasn’t allowed to finish. I did however find a make up race for August, the Medford Lakes Colony Sprint Triathlon.

Not much else to report really. Lots of ups and downs but renewed focus on my training with new goals and bigger ambitions. Looking forward to what August brings.