Yesterday was Father’s Day and as I had done a couple of times before I signed up with my Father in law to run the ‘Gary Papa 5K for Prostate Health International‘ in downtown Philadelphia. It’s a 5K run along the West River Drive (Martin Luther King Jr. Boulevard) and is just at the side of the Philadelphia Museum of Art. This is a fun race for a good cause and is also the site of my 5K PR (23:31 back in 2012). I don’t run that many 5K races anymore and I probably should as they are a good workout and will make me (in theory) run faster in my other races. In addition to running a 5K I had made plans to meet up with my friend Joe from my running group (the ‘Mickey Milers‘) who up until now I had only chatted to on Facebook, so I was really looking forward to the event.

I am at the halfway point in my training for the ‘Chasing the Unicorn‘ Marathon in August so when my Father in law told me he would pick me up at 6:30am I had an extra hour of sleep compared to my regular running schedule. The race wasn’t due to start until 8:30am and we made good time heading down to Philadelphia but it was lucky we arrived that early as it took us almost 30 minutes to find a spot to park. I’m glad I don’t live down there…sheesh!! It was almost a 5K from where we parked to the start line LOL. Once parked we headed over to bib and t-shirt pickup. They had not e-mailed out the race numbers beforehand so we had to look them up on the boards they had set up and then head to the appropriate table. I had a bit of a surprise when I spotted my number. Eek!! 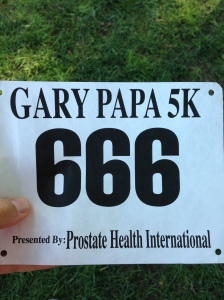 Seriously? I have to race with this number?

Well…I just went ahead and pinned it on. 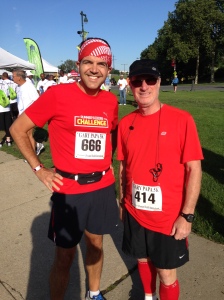 Here with my Father in law. No we didn’t coordinate our outfits in advance.

I had received a text message from Joe as I was arriving so once I had my bib I headed over to the steps of the Art Museum to meet up. Social media is a great medium to communicate and meet people on line but it is much better when you get to meet that person for real. We had about 30 minutes until we had to head to the start line and so we chatted and relaxed. As I have said in previous blog posts, I find it so much more relaxing to have someone to hang out with prior to the start of any event and it was fun to hang out with Joe. 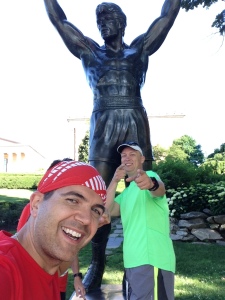 Representing the ‘Mickey Milers’ at the Rocky statue. ‘The Eye Of The Tiger’

Having never run before with Joe we hadn’t really discussed pace, walk breaks, goals or anything else about the run in advance so we just agreed to take it easy. I was out to enjoy myself and not set a PR today. The weather was cool and clear (although it did heat up as the race went on) and it was best to just start and see how we went on. We walked down to the starting area and were still chatting as the race began. I’m a talker for sure and Joe is obviously a very tolerant fellow to put up with my endless chatter….my wife would have run off at this stage. Thanks Joe 🙂

Anyway, we ran 9:21, 9:03 and 8:38 for the 3 miles which gave us a nice 9:00 average pace for the run. Neither of us took walk breaks. It was quite a busy course with the number of people out there so we did have to do a bit of weaving about but we stuck together the whole way. I forgot to tell Joe I don’t see out of my right eye so I did unintentionally bump into him a couple of times 😉

On our way back after the half way turnaround we passed by a man laying on the ground. He didn’t look in a good way. You always look out for other runners and it seemed that there were plenty of people around him at this point. Not sure of what, if anything, we may have added to the situation so we ran on although we were still thinking of the man who was down. We saw an ambulance heading up the course so we knew professional help was on it’s way. The good news (and it was in the news) was the runner is now recovering and is okay but it seemed it was quite a scare for everyone out there. Glad it is a happy ending. You don’t really hear of people collapsing at a 5K and he did look pretty in shape but as I said it was beginning to get warm and we didn’t know of any other factors.

Joe and I made it to the finish line and crossed together. I had a great time running with Joe and I look forward to running again with him sometime. We are both running the Rock and Roll Half Marathon in September but hopefully we can arrange something before then. 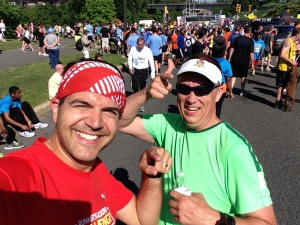 At the finish line. 5K in the books.

After Joe headed out home to spend Father’s Day with his family I waited for my Father in law who was running not too far behind us. He did great too. He is just beginning to get back into running after taking a couple of years off. He’s doing well so far and is also signed up for a few more races this year.

As this was Father’s Day we had plans to meet up with everyone for a beach day in Atlantic City, NJ (about an hour from Philadelphia). Typically we shower at my Sister and Brother in laws in the City and head down to meet everyone but this year my eldest Son’s Flag Football team had made it into the Superbowl and my Wife was watching the game which started at 10am and then they would head down later. I was unable to get back up in time so I was getting play by plays over text message as I was on the Atlantic City Expressway (I wasn’t driving so don’t worry).

My Son’s Flag Football team had played and 8-0 season and had won their playoff game last week so we had high hopes going into the Superbowl. Although they were down early in the game they rallied and won the game in the second half. I was a proud Dad (as I always am) this Father’s Day. He was so excited and yes, I am building him a trophy shelf in his room. 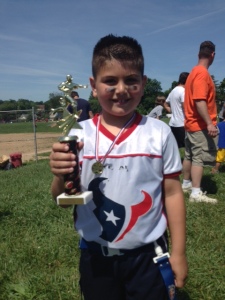 We spent the rest of the day relaxing on the beach, walking, digging and playing in the sand. We came home after dinner with two very tired boys who were fast asleep and needed to be carried up to bed.

What a great Father’s Day this year.