In January of this year I ran the ‘Goofy’s Race and a Half Challenge’ at Walt Disney World.  The challenge is the completion of the Half Marathon (13.1 miles) on Saturday and the Full Marathon (26.2 miles) on the Sunday.  For good measure my wife and I also ran the Family 5K on the Friday.  That was what everyone traditionally called the unofficial ‘Dopey’ challenge.  I think the names are pretty much self explanatory.  So in addition to the 39.3 miles official distance you add another 3.1 miles to reach the 42.2 miles of the Dopey…or so we thought… 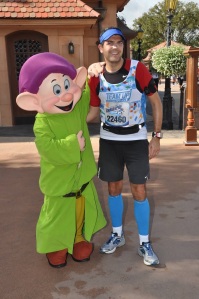 Last week runDisney dropped a little note into the runDisney ‘Wine and Dine’ registration email that the upcoming (2014) Walt Disney World Marathon weekend would see all new medals for the races.  I’d seen rumors rumbling around on Facebook and the blogosphere earlier this week that Disney was planning on hosting an official ‘Dopey’ challenge.  There were lots of wild guesses out there as to what would make up the Dopey.  Most thought that it would be what everyone had been unofficially doing all these years but what confused everyone was that it seemed runDisney had slipped a 10K into the Marathon weekend schedule.  Well today all those rumors were put to rest as runDisney announced the official inaugural ‘Dopey Challenge’.  This consists of 4 races on 4 days as follows:

Thanks to runDisney I now have 2 problems:

Race you to the Castle 🙂