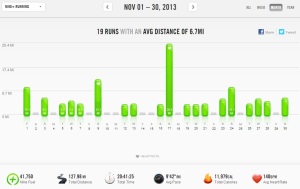 128 miles this month but a very busy month.

I had been focusing my training on running the 2013 Philadelphia Marathon and strictly following the Hal Higdon Intermediate 1 training plan but somehow I managed to sign up for and schedule two races in the two weeks leading up to the marathon itself and one just over a week after. Yes, two races during the time I should have been tapering. Luckily they both went off without a hitch as did the marathon and I also managed to earn a PR in one event.

The weather was a big factor in each of the races I ran during November. The first race was the Benjamin Franklin Bridge 10K run. It was a cold start but I managed to warm up enough to earn a new 10K PR. I don’t run many 10K distances so it was one of my longer standing goals that I had to beat. I felt good on the day and just went for it.

The following week was the Trenton Half Marathon. It was a really nice course and I ran the race with my wife. We had a wonderful time despite the very cold weather. There was a delay at the start line due to a clock issue and so we stood around in the cold. It took me a couple of miles to feel my feet. All was good in the end. The goal was to do no harm as we were both running the marathon the following week and we stuck to that plan.

On Marathon day itself we ran in t-shirt and shorts. We lucked out for sure with the weather and again it was a wonderful race. It was my 6th marathon (3rd Philly Marathon) and my wife’s 2nd marathon (she ran the 2013 Walt Disney World Marathon with me back in January this year). We had a marvelous time together. Running 26.2 miles with your spouse is definitely both an enjoyable time and a test of how much we support each other. We are already looking to 2014 for another marathon together.

As the Philadelphia Marathon was a week earlier than usual this year I had a decent recovery week before we toed the line for the annual Turkey Trot 5 mile race that my running club hosts. This year my parents had flown in from the UK to join us on the day, taking our boys on the one mile fun run/walk. The temperatures were frigid. It was probably the coldest I had been all year. I had three layers on and was still shaking. Needless to say I warmed up with a nice fast time with my wife setting the pace and me following a step behind her.

With November ending I am now focused on the upcoming Dopey Challenge at Walt Disney World which is (at the time of writing) just over 5 weeks from now. I have spent the first two weeks following the marathon in ‘recovery’ mode, the next four weeks are the intense training weeks and then I will have about a week and a half to taper. Luckily I am spending a few days in Florida on the Gulf Coast perfectly timed (through a happy accident) for the longest runs of the training plan. Altogether my time in Florida will cover about 60 miles of running including one 20 mile long run which I am doing during the 8 weeks between marathons. I am looking forward to some sunshine.