Everyone has their own way of relaxing. Some people like to sleep in late, some like to sit by a pool or spend time at the beach. What do we do as a family? Well, we run 🙂

In addition to being Memorial Weekend and the official start of the summer season this weekend my Wife and I celebrated our 10th wedding anniversary. We kicked off our celebrations with a nice dinner at P.F. Chang’s which meant we had chalked up an extra couple of miles mid-week to save our calories for our anniversary dinner. Luckily for us that we did as we were given a free dessert by our waitress for our anniversary and just a few minutes later another free dessert. I like that place for some reason. I could taste the miles with every bite. Ha!

With our kids staying overnight at my in-laws we started the weekend with a 10K run in Tyler State Park to celebrate our 10 years. The weather looked a bit iffy overnight but we lucked out and started running as the clouds cleared and got some magnificant sunshine. It was nice to run with Shari in the park as we both train there but we have never run together there as someone is always at home with the boys.

After the run we headed over to the Newtown Athletic Club where I had a massage booked (a birthday gift from Shari that I finally got around to using). When asked by the masseuse what type of treatment I wanted I told her that I was a marathon runner and she should use her judgement but I wanted to be able to run tomorrow. I think she went easy on me but it still hurt…but it was a good hurt I think. It was nice and relaxing and I felt refreshed once it was over.

After lunch together we picked up the boys and got together with some friends so all our kids could play together for the evening. While we were at our friends house my friend Mike suggested I look into reading the book ‘Advanced Marathoning‘ by Pete Pfitzinger if I wanted to look into increasing my speed which I had been discussing recently. I look to Mike for advice as he is a long time runner and still a great competitor and he is patient enough to listen to all my questions. We’ll see how this works out.

On Sunday we let the kids sleep in and took our time to get going. We headed to Yardley to run the Delaware Canal with the boys in the stroller for a family run.

Ready for a run

We bought this stroller last year to take the boys out together with us when we run. It’s a great piece of equipment for us. My boys however are growing quick and are testing the weight limits of the stroller and pushing this gives me a pretty good workout (I can still feel my triceps two days later). Luckily the Delaware Canal Tow Path is nice and flat and we managed 8 miles together. The boys were awesome and Shari and I pointed out the wildlife as we ran. Funny thing happened within the first few minutes in that my GymBoss timer (I use for the Galloway method) flaked out on me. Rather than stop and fiddle around with everything on the run I just went with it and ran without my usual intervals. Did pretty well running the first couple of miles pushing over 100 pounds of boys without needing to stop. Something else to work on I guess as I take this time to work things out before the marathon training starts in July. 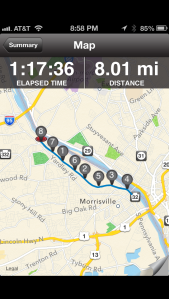 When we do the Canal run we park at Cramer’s Bakery in Yardley so we have a place to grab a cup of coffee when we finish. With the boys we promise them a treat from the bakery if they are good during the run. It’s amazing how good boys can be when you promise them a cupcake or a brownie. Anyway, we finish up the run and park the stroller at the bike rack next the bakery, choose our treats and sit outside the front of the store to eat and drink before heading home. As you can see by the photo below Asher must have worked hard during the run as in addition to his brownie he needed to take Shari’s bagel…he needed the carbs I guess?!? 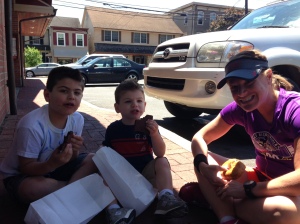 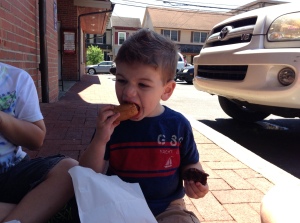 So how far did you run kid?

So, how do you follow two days of family runs? You get up at the crack of dawn on a holiday and head out for a bike ride. I got up at 5am on Monday morning, hitched my bike to my car and headed out for my first outdoor ride of the season.

The bike rack is back on the car. It will be there for the summer now.

I headed out early to the canal path where we ran yesterday. It was a little cooler than I had planned but other than really cold fingers I was pretty much appropriately dressed. I wore my new Team Great Britain cycling jersey for this ride. The ride itself was fine. 20 miles from Yardley to New Hope and back. It felt good. I have a 25 mile ride in a few weeks on a very hilly course and while this was flat it was still a good test for going long. I’ll deal with the hills when I get there. Below is the ride summary.

Ride route from Yardley to New Hope and back

I finished my ride and got back home around 8.15am so Shari could go out for a run. The boys were still asleep when I got home so I had a nice cup of coffee and a bagel with peanut butter and honey. Now that was a treat.

Micah – who wore it best?

Once Shari got back we got the kids, our picnic lunch and headed out to the Philadelphia Zoo for the afternoon before heading back for a family barbeque.

It seems like we did a lot with all this running and biking but to me it was a great relaxing weekend and I wouldn’t have it any other way. 🙂

Hope you all had a good holiday weekend too.

Also, as a quick reminder, now that Memorial Weekend is behind us here’s an activity for next weekend (and through July 31st). Great fun for a great cause with great prizes. Check out the great medal too. Everyone who enters receives this specially designed medal! 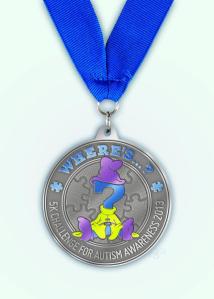 As it is a virtual run you can run/walk this 5K anywhere in the world before July 31st.  You can head over here to sign up. Don’t forget to send your photographs in to be eligible for one of the prizes.