I guess it is best to start at the beginning of this journey. I had been preparing for the 2014 Walt Disney World ‘Dopey Challenge’ since I signed up (through Team Up for Autism Speaks) soon after they made the official announcement back in March 2013.

Having done all the training as closely as possible on the plan I was using I felt good going into the weekend and my only concern at the beginning of the week was the weather and what would happen if I couldn’t get to Orlando in time. The previous few days had given us frigid temperatures, icy road conditions and lots of flight cancellations in the North East and I was beginning to freak out just a little bit. I finally decided on the Monday that I would book a hotel near the airport on Tuesday night so I could leave my car parked at the hotel, get an extra hour or two of sleep (important for the days ahead) and have someone else worry about getting me to the airport on Wednesday morning. It was a good move for me and allowed me to relax just a little bit. 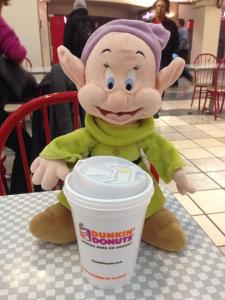 Incidentally the day before the I left the team coordinator for the charity I was running with reached out to all the Dopey runners in the group and offered to pick up our race packets and deliver them to our hotels. Nice. Also, I read online the runDisney recognized the fact people were having trouble getting out to the event and offered packet pick up early before the 5K to accommodate runners.

Wednesday morning came (first of the early wake up calls for the week) and I made it downstairs and waited for the hotel shuttle for the airport. Looking up at the departures board my flight appeared to be on time as scheduled. Check in was quick and easy. This time around I took my racing gear in a carry on (as all the blogs and magazines advise) and this would double on the way home as my Disney gifts carry on (believe me, I filled it up on the way home). 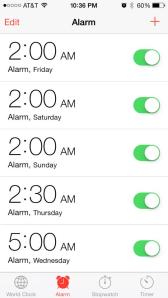 A few early mornings. The only downside to this whole thing 🙂

It was funny to me that there were so many folks at the gate obviously planning to head down for the same event as I was. There were familiar brands of running shoes, race t-shirts and runDisney t-shirts on all the folks sitting by the gate. I met Mark Remy from Runner’s World whilst sitting around waiting and also a member of the Clif Bar Pace Team who was pacing the 2:30 Half Marathon pace group at the weekend. I also met a married couple heading down to run the Dopey who I bumped into every morning among the masses of people at the starting area. They were my daily ‘good morning’ folks. 🙂

Once arrived in Orlando I picked up my rental car and headed straight to the Expo at the ESPN Wide World of Sports. Nothing beats that feeling driving onto Disney property and passing under the sign which says ‘Walt Disney World – Where Dreams Come True’. 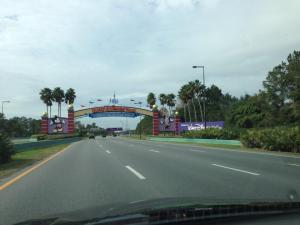 One of my favorite signs

I arrived just after noon and the Expo parking was packed. I had to park in the overflow area which is essentially a field just off the main entrance. I had fears that the Expo would be crowded but to my surprise it wasn’t. It may be because today was mainly folks pickup up Dopey and 5K bibs and this year they split the Expo to other areas around the property. The packet pickup was as usual in the HP Field House. Dopey and Goofy pickup was separate from all other races and it was pretty quick, easy and painless. Once I picked up my two bibs (one for the 5K and 10K and the other for the Half Marathon and Full Marathon) I was given a ticket to pick up my souvenir pin and sent over to pick up my race bag and t-shirts. In all there were 6 shirts for the weekend (one for each race and extra for the Goofy and Dopey) and 5 of the shirts were all included in the clear plastic race bag they provided. Runners had to head over to the Jostens Center to pick up the 5K shirt. There was a little merchandise in the HP Field House but the bulk was in the main Expo hall at the Jostens Center, so that was my next stop.

Packet pick up was quick and orderly

T-Shirt pick up was well organized. Shirts for each event were packed together.

Some merchandise in packet pickup area. Not too crowded on this side. 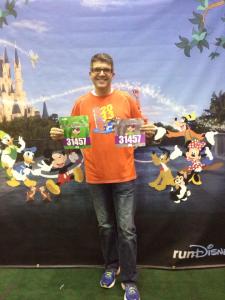 Just a word about the shirts for this year. Rather than the usual unisex shirts (except the 5K) there were women’s cut shirts as an option for this year. The actual shirts felt a little larger than last year and were of a slightly softer material and again were long sleeved. Last year was a heavier, coarser, paneled shirt vs. this year’s shirts. Overall I liked the shirt designs and the colors this year. Even the short sleeved cotton 5K carried over the theming on the shirts.

Over at the Jostens Center I hit the runDisney merchandise area. It was crowded but not manic. Each aisle seemed to be dedicated to each race but mainly 10K, Half, Marathon and Goofy. There was some Dopey merchandise (after all there were 7,000 people who signed up) but not as much as I would have expected given it being an inaugural event. Nevertheless I got what I wanted and because there wasn’t too much I actually spent less than I had budgeted (phew!!!). I got to use the Disney Visa gift card the boys got me for Father’s Day and together with the 10% discount for my Disney Visa Card I left the runDisney merchandise area just under $70 lighter.

The Expo was quite spacious with less crowds than I had experienced in 2012 and 2013. This may be as I said earlier because it was mainly Dopey folks (Marathon and Goofy runners would probably hit the Expo over the next couple of days) and also because I had no kids in tow this year but it was also because they spread the Expo to Champion Stadium.

I spent a little time at the Expo, not really shopping as I have been to umpteen expos in the last year. What I did do is walk around chatting to folks. I stopped by the runDisney booth where I met Rudy Novotny who was walking around the floor announcing folks at the expo and also I finally got to meet Jeff Galloway (after three attempts if you count 2012 and 2013 runDisney expos). I also got a chance to meet Sarah from sparklyrunner.blogspot.com who I bumped into over the next couple of days along with many other folks.

I came into the Expo too late in the day to sign up for the New Balance Disney running shoes. I’d heard about 2-4 hour waits for the shoes (including sign up and appointment time) and I had plans for dinner and wanted to get out to the parks early. Although I like the look of the shoes (especially the Goofy shoes) I am not sure I would really wear them (nor would my wife really allow me to). I saw plenty around the park and I have to say the Goofy’s did look good. 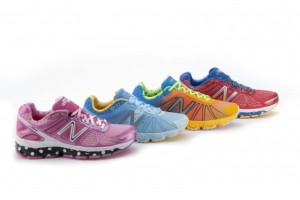 On my way out of the Expo I bumped into Michelle and Mike from the ‘Mickey Miles Podcast’ and said a quick hello. I would be attending their brunch tomorrow after the 5K. It was nice to meet up with everyone at the Expo but I had plans in the Magic Kingdom that night so I left the Expo early and made my way to the park. This was to be my ‘late night’ so I made a dinner reservation (Tony’s Town Square Restaurant), took many photo ops and stayed for the ‘Wishes’ fireworks spectacular before heading back to the hotel to check in and get my 5K race gear ready.

Michelle and Mike from the Mickey Miles Podcast

Just as an aside, on the eve of my arrival in Orlando my wife forwarded an email for an order she had place with ‘Disney Floral and Gifts’ so when I arrived at the Magic Kingdom I headed straight to City Hall and picked up my gift. As you can see from the pictures below my wife really knows how to treat me well. She had ordered a Disney cooler full of Disney treats. It came in handy for waiting in line that day. What a great start to my weekend. 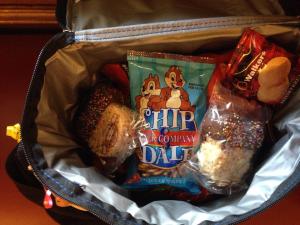 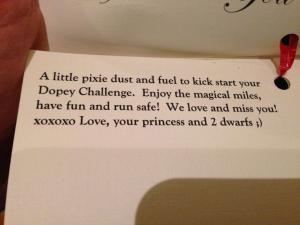 One thing I was tracking was my Fitbit during the week. Most training plans and coaches will advise to try and rest and stay off your feet before a race. Hey, I’m at Disney. Do you think I’m just going to sit around in my hotel room? So my first day down which was a non-running day my Fitbit hit the mark at 7.48 miles. As you will see during the weekend from my Fitbit stats the staying off your feet principle didn’t work out too well 😉