After a few hours of sleep it was time to get up for what would be the first of the 4 races that make up the Dopey Challenge, the Walt Disney World Family 5K. For the first 2 races I had planned to run in Disney themed costume and for the last 2 races I would be wearing the charity team gear. For this race I would be running dressed as ‘Pinocchio’ (as my wife will gladly tell you, she didn’t approve of this one). This was only the second time I had ever run a race in costume, the first time was a year before at the Family 5K where my wife and I ran as Cinderella and Prince Charming. Today would let me know if running in Florida in red velvet overalls would be a wise decision 😉

I set out from my hotel (I stayed off property about 10-15 minutes from EPCOT) and arrived early for the 6:15am start. I wanted to get there early as I would be repeating this journey over the next few days and wanted to make sure I was comfortable with the drive. It also gave me a chance to meet up with folks before we had to head for the corrals and some time to relax a bit before the start of the race.

My latest start of the week. Arriving early at EPCOT 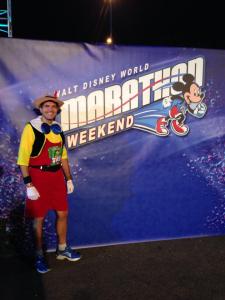 Pinocchio for the 5K

On arrival I headed over to the bag check area (not the corrals) as I was planning to meet up with the folks from Team #runDisney for a pre-race meetup and photo. Whilst there I bumped into some folks that I had only until then known through Facebook (Rhonda and her daughter Rabekah, Sarah and Matt who I briefly met at the expo a day earlier and Scott and his wife Susan). It began to rain lightly and so I moved into the tent which would later become the merchandise tent and hung out and chatted to folks only to find when we looked outside that everyone had already moved out to the corrals. There was no announcement that we heard and we appeared to have missed the photo at the meetup so I headed straight to my corral (corral A) where I met up with Rob, a fellow Autism Speaks runner who was also running the Dopey Challenge. He recognised me by my costume…I was kind of conspicuous. Hey, it’s a runDisney event, when else can you run in costume and not feel self-conscious 🙂

The 5K event was launched with the usual fireworks and Pluto was at the start line to send everyone off. Those fireworks (something I always look forward to) were the start of what would be an amazing 4 day journey for me…and about 7,000 other ‘Dopey’ runners. The course was the same as it had been last year, leaving EPCOT through the parking lot, entering the park behind ‘Test Track’ and winding through ‘World Showcase’ back to the finish line area just past the park entrance.

Feeling a little ‘wooden’ at the start.

During the 5K when I entered the Germany Pavillion I saw a long line for a character photo opportunity. I slowed down and saw that it was Dopey. I had to take that photo no matter how long the line. One thing about Disney races is that the photographers and the cast members are very efficient about moving everyone through the photo lines. Although there was a bit of a wait for the photo it was an advantage being in corral A and getting there early. I heard that later on during the 5K the line stretched from Germany through the Italy Pavillion. I heard people waited in line for about 10 minutes. As 7,000 of the 10,000 runners were attempting Dopey and would probably be taking the race easy I wasn’t surprised to hear that.

Here is my photo with Dopey. My wife is sure Dopey is laughing at my choice of costume. You can decide for yourselves.

Dopey and I during the 5K

I did pass a couple of character stops in the 5K (and some of the other races). I had made a rule that I would only stop at a character where I intuitively remembered their name without having to think too hard. Although I can always look up the character name based upon the movie after the race, if I approached the character and I had to think too much I passed it. My theory being that someone may ask later who the character was in the photo and if I couldn’t think about it on the spot then I didn’t want to look like a ‘Disney amateur’! Sorry Remy (from ‘Ratatouille’ who was in the France Pavillion), next year 🙂

I had a lot of fun in the 5K. It’s great that the cast members are all out cheering you on and there were plenty of volunteers (who did a great job all weekend). It was raining lightly when I finished the race but it kept me cool (in my red velvet costume). 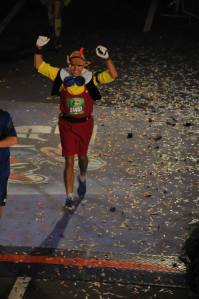 What was noticeable throughout the whole race was that there was a lack of ‘families’. This race is advertised as the ‘Family 5K’ and they kept announcing the fact at the start line that there were 10,000 runners. But if you strip out the 7,000 runners doing the Dopey Challenge this left only 3,000 runners (same numbers for the 10K). When signing up for this race they announced that they were getting rid of the stroller division. It seems sad that they put an emphasis on this being a family event and indeed the 5K is a great way to get young folks into running especially when they can run with other family members but the actuality didn’t match up to the name. I know I was up front in Corral A but from what I saw families were few and far between.

Overall though I had great fun. It was a good opportunity to start the weekend off stretching my legs and getting in some (very) early morning Disney Magic. The medallion (first of the six for the Challenge) was cool and I had a fun time.

The first medal of the Dopey Challenge

Now a quick word about the Dopey Challenge. As I mentioned in my post about the Expo, Dopey runners were provided with 2 bibs. One for the 5K and 10K and another for the Half and Full marathon. A quick tip for making sure your bib survives each of the two days. First, I attach ring reinforcers that I used to use back in my University days to make sure the bib holes were more secure as I needed to reuseeach bib, and second, after each race I had a manila folder with me so I could keep the bib flat and let it dry out a little between races. It was very warm the first three days of the Challenge and I think this did help ensure my bibs were able to make it through the races.

Also, for Dopey runners and later for the Goofy runners, at the end of the 5K we were ushered over to the left hand side of the finishers chute and we were given a plastic wristband showing that we were 5K finishers. It was a bit chaotic the first day but I will say that the subsequent races the volunteers were much more efficient. Today was all about receiving the first of the wrist bands, the subsequent races involved extra steps to mark off each wrist band and add another.

I didn’t stick around too long after the end of the race as (1) it was raining, and (2) I had brunch plans with the team from the Mickey Miles Podcast at the Yacht and Beach Club at 10am after the race. Brunch was great. I got to meet up again with Michelle and Mike together with other great folks who have been on the podcast or who had become friends through Facebook (too numerous to mention but you know who you are! 🙂 ) During the brunch Mike and Michelle anounced the launch of the Mickey Miles Podcast running team, the ‘Mickey Milers’ which will raise funds for the Charity ‘Give Kids The World‘. You can check it out and sign up to run with them here. Also, a Disney vacation (yeah, right…a vacation) would not be complete without my Mickey Mouse waffles fix. Thank you Mike and Michelle for hosting.

After the brunch I headed out to Disney’s Hollywood Studios for some park time. Still not doing the ‘stay off your feet’ thing I was supposed to. So I ran a 5K which is 3.1 miles, my Fitbit stats for the day ended up being 11.26 miles. We will see how that works out over the coming days.