On Sunday April 17th I ran my 20th half marathon, the Rutgers UNITE Half Marathon. It was a race I ran in 2015 and really enjoyed (I had a good race after a long winter) and it fit nicely into my training plan for the upcoming New Jersey Marathon. This was another race put on by CGI Racing who also host the Love Run Philly and the New Jersey State Triathlon, both of which I have participated in over the last couple of years. They do put on a good event.

I was looking forward to this race as I remember it being a fast and fairly flat course and was looking forward to seeing how my pace was during race conditions. I’ve been taking it a little easy this winter as my goal is to stay fit and healthy for the upcoming HITS Hudson Valley Triathlon this July. My goal race is the Mohawk Hudson River Marathon in October. I was close to my PR last year and I felt that it was achievable the way I was training.

This year I opted to pay an extra $15 for race day packet pickup so I didn’t get to attend the expo. From what I recall from 2015 it was a small expo so I didn’t miss out on too much. The extra $15 was probably the gas and tolls I would have spent driving up and back prior to the race.

The forecast was looking good and so I was able to put away the winter gear and planned on wearing a short sleeve shirt. I decided that this was a good enough excuse to debut my new INKnBURN Magnum PI tech shirt. Actually, I didn’t really need an excuse. 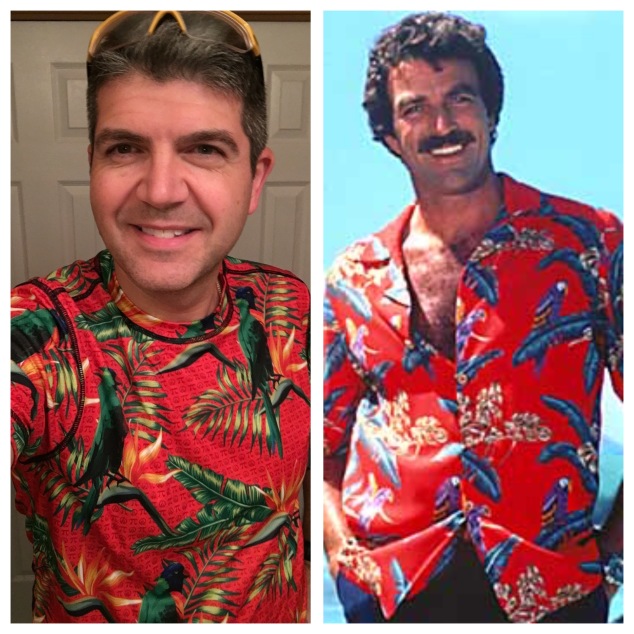 Hard to tell the difference I know!!

I grabbed a cup of coffee and one of my new Honey Stinger waffles (mmm….tasty) for my pre-race breakfast and set out while it was still dark for the 40 mile or so drive to the start line. I got there early on and was parked fairly close to the start line and was able to walk to packet pickup and back to my warm car (it was still a little chilly in the early hours). Packet pickup was quick and seamless, although I was told I had to pick up my shirt and mug at the finish line. Not a big deal. In fact, I probably could have arrived a little later as it was a quicker process than I thought. My tip, register for morning of race packet pickup.

You know when you have arrived on campus

Packet pickup was quick and easy. Just had to show ID. 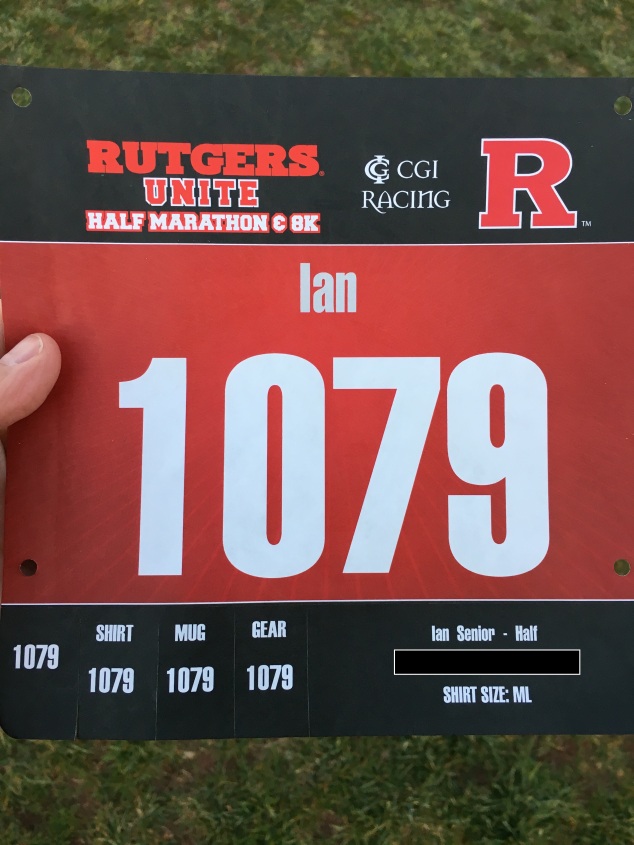 Packet pickup was quick and easy. Just had to show ID.

It had not warmed up by the time I left my car so I was wearing a warm up jacket which I planned to check so I would have it at the finish line. I had packed a large trash bag to wear in the start chute so headed out to bag check. While I was there I met up with fellow Mickey Miler and host of the Runner Of A Certain Age podcast, John. It was thanks to John that I signed up for this race last year. I hadn’t seen him for a while but I had been a guest on his podcast a couple of times before and we keep in touch on social media.

Meeting up with John pre-race.

In writing this recap I took a look at my last year recap. As you can see below, this picture made me chuckle when I re-read last year as we took the same photo in the same spot.

It was almost time to start so we made our way over to the start line. I made the same mistake as I had the previous year and entered the chute at the back and had to make my way forward between the 8 and 9 minute pace groups. There were no corral placements, you would just line up at the approximate pace you planned to run. It was only when I reached that point that I realized I could have entered the chute from the side. Oh well. Not a big deal and I was very polite as I made my way forward. I was wearing my trash bag to keep warm but realized I didn’t need it as it was warming up nicely so I took it off to the side and waited for the gun.

I made my way from the back to my pace time area. 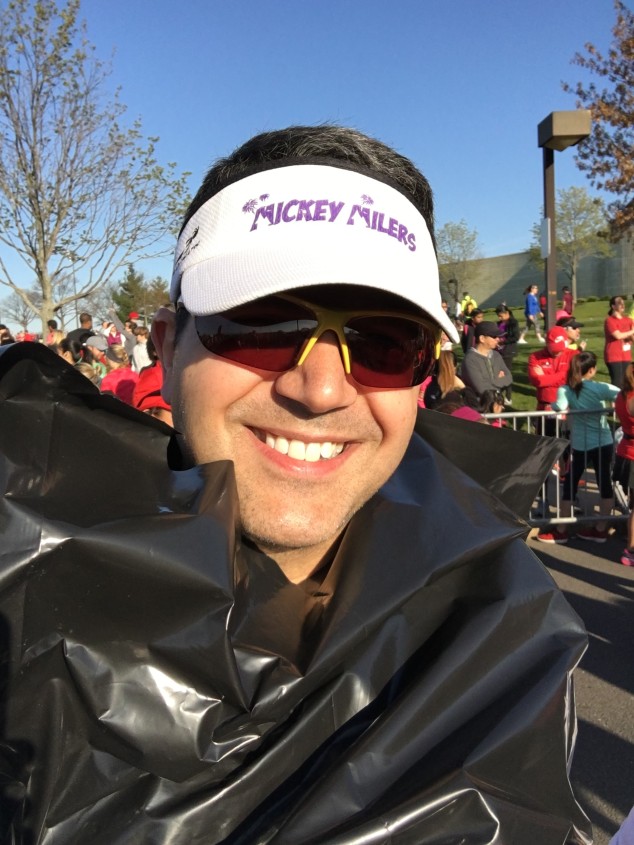 Always a stylish choice. Black goes with everything.

I made it a little closer to the front.

Get the chopper TC. I’ll meet you at Rick’s for a cold one after the race.

As this was a goal race, I didn’t stop to take pictures of the course. The course itself was a little changed up from last year. There was more time on the newer side of the campus and it seemed to take us around more of the back of house areas than through the campus itself. There isn’t much course support from spectators as such on the back side of the campus (glad I wore my headphones) and there is only so much maintenance equipment and housing blocks you can see before you get bored. The second half of the race (once crossing over the highway) is more picturesque as you run through a park but you really don’t hit the campus area until after the finish.

About 15 minutes after the half marathon started the organizers sent off the 8K runners. They started on the same place as we did but on the opposite side of the start line. Essentially they run the last 8K of the half marathon distance and would explain why we ran back through the start line around mile 8. It was noticeable that there were more water stations on the second half of the course as a result.

Personally I was having a fairly decent race. I was feeling good and the course wasn’t too congested. There were some nice open stretches and for the short inclines, there were plenty of declines. It was a fairly limited elevation through the first 8 miles. Here are my splits for the first 8 miles.

My first half splits.

I was feeling good going into the second half the race. My 10K split was within a couple of minutes of my 10K PR so all I had to do was keep it going.

As I was going well I started to do running math in my head. Big mistake. It was a distraction and my numbers and timing didn’t seem to make sense. I abandoned that as it is a bad habit. I didn’t think I could make my goal time (sub 1:50) but I still knew I could make a good go of the race. There are no pictures that I took on the course but I did get this professional shot from the second half of the race.

The second half of the course in the park features a long out and back. It is about a mile and a half or so. As I had run this last year I had a sense of where I was. I remember it feeling a lot longer last year as it always does when you don’t know where the turn around is. I found this section a lot more comfortable to do this year.

Once out of the park you run through the back of a nearby neighborhood and into another park. The last couple of miles have the two biggest inclines (not hills as such). There is a final turnaround in the park as we run around a gazebo. It was at this point when I hit a mile to go that I realized I wasn’t going to hit my sub 1:50 goal, I was getting a little tired. I still thought I could be close to a PR but either way I knew it would be a good run for me. 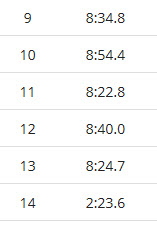 My second half splits. It shows that I slowed around mile 10.

After the final crest of course it is all downhill to the finish line. I just picked up my pace and ran it in. I was feeling strong and pushed through to the end.

I crossed the finish line with a time of 1:51:55. Really happy with my time but sad because I hadn’t PR’d. Still, I felt good.

I grabbed a bottle of water and excited the finish chute making sure to take a couple of photos to document the experience.

It was a great run in to the finish line.

Happy to be done. I worked hard. 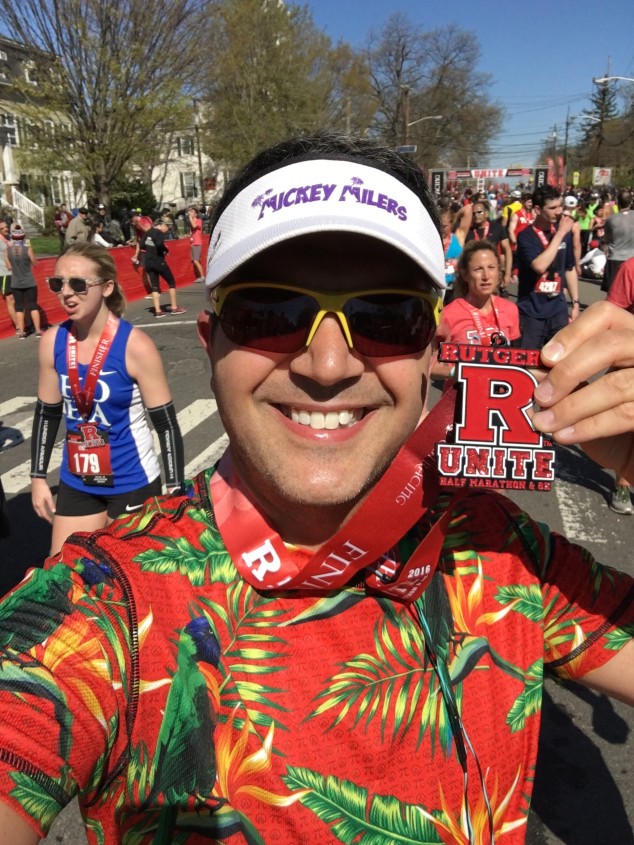 The medal was so much nicer this year.

Before I left the finish line I took a quick look at my running data to see how close I had been to a PR when I realized that I actually had PR’d the race. No wonder my math hadn’t worked out on the course. I had my old PR of 1:52.43 (2013 Atlantic City April Fool’s Half Marathon recap) wrong in my head and I actually PR’d the race by almost a minute.

Needless to say I was very happy once I realized. It had been over 3 years since I PR’d so you can excuse me for forgetting!

Once past the finish chute we were shepherded out to the food and back check areas. The food was well organized. Everyone was given a plastic bag containing post race refreshments as well as more water and they had Coke/Diet Coke available (although I haven’t touched soda since last August).

Food bags were well organized and runners were moved very quickly through the tent.

We then were able to sit and stretch out on the lawn area just outside of the race set up. This is really a wonderful area to sit and cool down after the race. It really was the most picturesque part of the day. Shame it was after the race and not during. 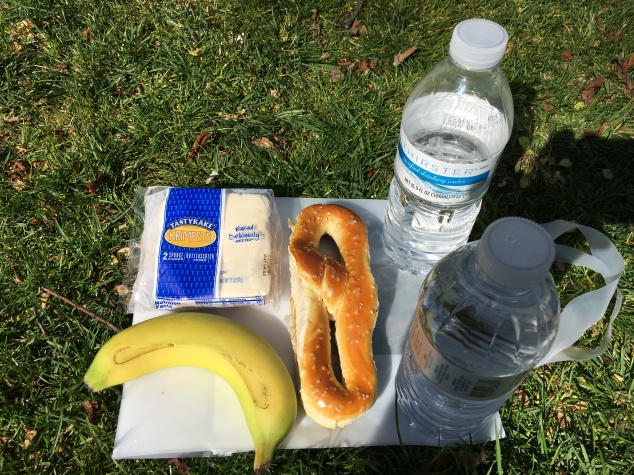 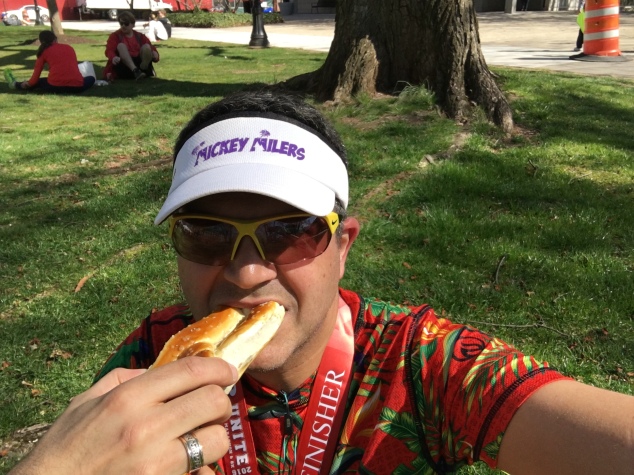 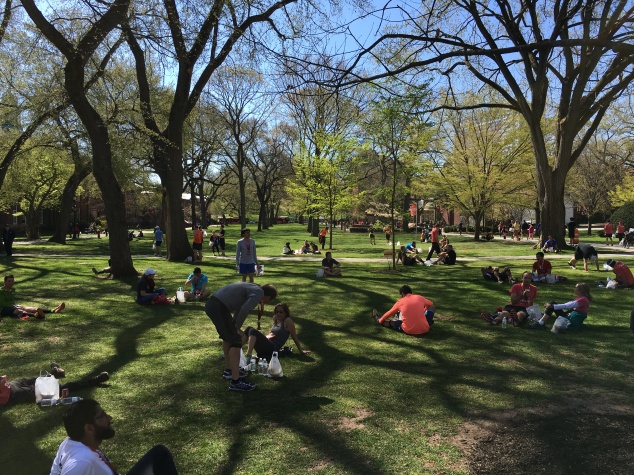 A great place to rest up and relax post race.

After sitting for a while I went to bag check to receive my bag. I didn’t need my jacket after all as the weather was glorious. The bag did come in useful though as I had to pick up my race shirt and mug and it was nice to have something to pack it all up as I then had to line up for the shuttle to return to the starting line to get my car.

In additional to my medal and race shirt (not shown) I got my race mug which CGI gives out for each race.

Really pleased with my day and again this would be a race I would recommend and return to. I think I would like my wife run it next year so she gets a chance and I will do something else, probably the Love Run Philly as they are back to back weeks and both run by the same company.

I guess it was all down to the shirt for me. I was thinking of heading the blog ‘Magnum PR’ but that would have been a little too cheesy.

Thanks for reading. Sorry about all the Magnum references 🙂