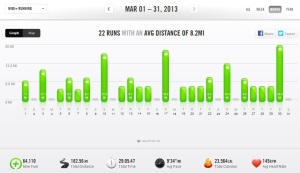 March is the step up month in my marathon training and I clocked just over 182 miles of which 100 were indoors on a treadmill and 82 were actually outside. Yes, March brings the beginning of spring and after finally getting outdoors on March 10th for a teaser of future weather I feel we got ‘punk’d’ by Punxsutawny Phil. What the heck happened?  We got snow in the last week of March and it sent me back inside the gym again. 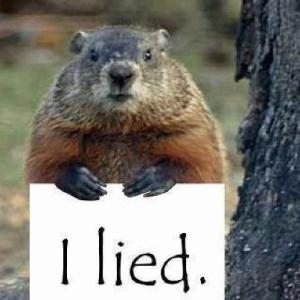 Not quite telling the truth

Anyway, as mentioned earlier, this was the month my marathon training started introducing the ‘longer’ long runs.  I had a 17, 18 and 20 miler to do and thankfully all were able to be done outside.  The 18 miler was the coldest and started off with me slipping on ice as I left my house.  Needless to say that was a very slow and decidedly steady run.  But run it I did and made it through the month.  I struggled a little with an ache in the arch of my right foot during the middle of the month and I had to cut a run short to make sure I didn’t push myself too far.  It had been nagging me for a couple of runs but I wanted to make sure I was fit for the long runs.  Thankfully all was okay.

My last long run was outside by the Delaware Canal and it happened to be on the first day of trout fishing season.  As the water level was high my progress was halted by some flooded areas so I repeated a 6 mile out and back three times as part of the run.  I ran multiple times past dozens of people sitting or standing by the banks of the canal fishing thinking to myself how can they sit there doing nothing, just waiting for something to happen?  They were probably looking at me thinking what the heck is that guy doing running past me again and again….is he lost?  They wore camouflage and I wore spandex.  Two very disparate worlds.  I struggled around mile 16 on that run and although I finally made it to mile 20 I actually was beat up.  I wasn’t using my regular energy gels and I feel that made a huge difference.  I actually for a couple of hours after.

I rotate a couple of pairs of Brooks Adrenaline GTS 12’s at a time and track the mileage on each and the pair I was running in had reached 450 miles by the end of the month so I feel that the arch pain and sore foot I experienced this month may be because I pushed that particular pair too far.  It may be that the discomfort was a sign that the shoes were basically past their due date. Nevertheless I now have a new pair of Brooks Adrenaline GTS 13’s to break in before the New Jersey Marathon on May 5th and another pair being delivered to keep on hand when my next pair (already at 294 miles) are ready to be retired. 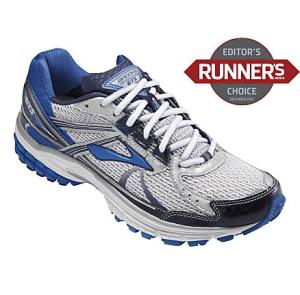 March was memorable in that runDisney announced a new event for 2014.  The inaugural ‘Dopey Challenge’.  You can read about it in my post from the day it was announced.  I am so pumped by the prospect of this event that I am very close to an intervention for sure.  I have decided that I will again be running with TeamUp to raise funds for Autism Speaks.  It is a cause near and dear to me as I have a family member who has been diagnosed with Autism Spectrum Disorder and I feel it is the least I can do to help.  Once registered I will be posting my training plan and fundraising ideas so watch this space!!!

Alternatively you can head over to my new Facebook page which launched this month.  It is linked to this blog and will offer a forum for people to post and share along with other news and some giveaways.  Take a look, ‘Like’ it and see what you think.

Tomorrow is April 1st and is the day the registration for the 2013 Philadelphia Marathon opens up.  This is a special event for me as Philadelphia was my first marathon back in 2011 (not that that was too long ago).  This year the plan is for my wife Shari and I to register and run together.  This will be her second marathon after Walt Disney World where we ran together too.  I want to take this one easy as I will be focusing on completing Dopey standing up and uninjured.  I will be focusing on the upcoming New Jersey Marathon in May as my time goal for the year.

April also is the start of what is our ‘race’ season.  We are not competitive runners but have signed up for a number of events over the next few months to keep us in shape.  First up is the Atlantic City April Fool’s Half Marathon on April 7th.  You can see the races that I have planned on my ‘Races and Events‘ page. I hope to be able to do some race recaps on these events whenever possible.

So final thoughts.  I am hoping that the weather finally breaks and becomes what we expect spring to be (although temperatures in the low 50s and overcast would be fine on race days).  April has one more long run and then the beloved taper.  I will also be signing up for the 2013 Philadelphia Marathon and the 2014 Dopey Challenge.

On to the next adventure.

See you out there 🙂