Yesterday I took part in the ‘2013 Cooper Norcross Run The Bridge 10K’ race. This is a race across the Benjamin Franklin Bridge spanning the Delaware River between New Jersey and Pennsylvania and then through the streets of Camden, New Jersey and along the waterfront before finishing in Campbell’s Field home of the Camden River Sharks baseball team.

This was the first time I have run this race although my wife has run this the last two years and my father-in-law has also run this event a few times. This was also a 10K race and I do not seem to run many of these. My PR for a 10K was set back in August 2011 of 52:07 at the Philadelphia LiveStrong Challenge. I hadn’t run a 10K race since then. I had it in the back of my mind that I was going to see how I felt given that I was 16 weeks into marathon training and if I felt okay I was going to go for a new PR. I wanted to see what I had in my legs going into the marathon and still I had a couple of weeks left for recovery and rest (the dreaded taper) before race day of the marathon.

We set our clocks back on Saturday night which provided an extra hour of sleep (not that I really took advantage of it) and the plan was to meet up with my father-in-law, my sister-in-law and her new fiance (see what I did there Mike?) at a central meeting point and drive down to the starting line together at the baseball stadium to pick up our race numbers and packets. Needless to say not all of us set our clocks to the correct time (not mentioning anyone in particular) but the good news is that we were all together before the race with our numbers on and ready to go.

All of us pre-race with the Benjamin Franklin Bridge as our backdrop.

I had done a 10 mile training run early on Friday morning and the weather was great. I was running in a t-shirt and shorts. What a difference a couple of days make. I woke up to find it was about 40 degrees and the wind made it feel about 10 degrees less. I dressed in my winter gear (tights, long sleeve shirt, gloves and a beanie). I wasn’t sure if I should wear an half zip over my t-shirt but I thought if I was pushing it I was better a little too cold than too hot as that would impact how I felt during the race.

We wished each other luck and headed for the walk to the start line. I wanted to get a little ahead so I wouldn’t get stuck in the pack and everyone was fine with that (they probably prefered that but I’ll say it was to encourage me, right?). The start line is at the base of the bridge on the New Jersey side. It’s probably a half mile walk from the stadium up to the start line. I had not eaten before the race so I had a Gu (yummy Salted Caramel) with me and a bottle of water and headed out.

I had turned my Garmin off when I was inside the stadium bathrooms as it had lost its signal and when I went to turn it back on it crashed. I rebooted it twice on the walk up to the start line. No good. Uh oh. I had also forgotten to stretch while I was getting my gear together and checking my bag. As I still had a few minutes I pulled over to the side of the road, rebooted my watch a third time and did my stretches. Third time was the charm with the Garmin. Well, almost. It had reset itself completely. I quickly set the watch up from scratch and changed the display to what I needed for the race (Distance/Time/Average Pace) and headed to the start. Once at the start line you actually had to jump a barrier to cross to the start line. I did that very carefully.

Wearing an extra layer at the start line waiting for signal to go.

There was a decent crowd at the start. I think in total there were about 3,200 runners. What you see from the start line is the climb up the bridge. Nothing too exciting really. It was pretty crowded. Having run the Golden Gate Bridge earlier this year and having driven this bridge many times I remembered that you cannot really see much over the sides especially from the center lane of the bridge which was where I started.  The starting horn sounded and off we went. Not much time for selfies or bridge shots when you are aiming for a PR so this will pretty much be a recap and you’ll have to take my word for what I saw on route 🙂 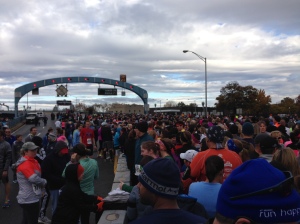 View from the start line

The run up the bridge was pretty crowded as expected. It took almost the first mile to really start spreading the crowd out so there was quite of bit of weaving for me at the begining. I know it’s a bad habit of mine but I wasn’t as far up as I really needed to be among the pack of runners. Once I had reached the crest of the bridge for the first time I was able to let loose a little on the downhill section. I was wearing my Jeff Galloway Gymboss timer but I ignored the first couple of walk breaks as I wanted to get into position for the race and I felt okay. I was pushing hard but it was comfortable.

The turnaorund is at the base of the bridge on the Philadelphia side and then you are faced with running back up the bridge again. Honestly I just put my head down and didn’t think about the incline. I was running comfortable and it didn’t seem to bother me. There was a water stop on the way back across the bridge so I took my first walk break which was a little out of sequence but I took it for the full 40 seconds and then headed up the bridge and down into Camden.

Once across the bridge the race seemed to be pretty flat for a while. There were a couple of turns and I wasn’t sure when the next water stop would be so I took a walk break only to find the water stop around the corner. Ugh. Well, never mind, I can run and drink at the same time but I am useless at making the trash with an empty cup while running. As we were now running on the city streets and were sheltered from the wind it started to feel warm. I was still wearing my beanie and gloves so I pushed my sleeves up a little and rolled the beanie up to let me ears out.

The race along the streets was fine and then we turned and headed towards the navy yards entering it through a back entrance. This took us up to the waterfront where we ran alongside the pier where the SS New Jersey now stands as a museum. At the waterfront the wind picked up and I’m glad I had my warm gear on. From there pier the race headed up a small incline and down back to the streets of Camden. My time was going well and I felt that it was going to be possible to run a new goal under 50 minutes. We turned to the left and I saw the stadium and was thrilled that I could see the finish line location up ahead and my time was great. What I hadn’t done was read the course map correctly. D’oh! We didn’t run directly back to the stadium but took a turn right and ran around some rehabed condos and approached the stadium from another angle. Was I going to make it in goal time?

I entered the stadium into right field and the finish line was in left field. I dug deep and ran to the finish line. I hit my watch and it read 49:08:55 (49:09 was my official time). I felt great. I didn’t hurt and I made a goal that I set myself. Here is my Garmin file with the map and my splits http://connect.garmin.com/activity/399334028.

The event was run for the benefit of the Larc School. The students of the school were on hand to hand out the medals to the runners. From there I grabbed my water and goodie bag, picked up my checked bag, stretched and headed down to the finish line area to wait for everyone to finish. I grabbed a good spot and was able to cheer everyone on and get some great pictures of everyone coming down the chute to the finish line.

A big shout out to my father-in-law who was running a race after a lay off from running for about a year. He looked good and said he felt good after the race so I’m pretty happy about that as is he. Mike and Rina ran into the stadium with smiles on their faces (I think they knew I was taking pictures) but as far as I know they had fun. Mike is running with my wife and I in next week’s Trenton Half Marathon so I am looking forward to running alongside him for the first time then. I like racing with family and friends. It is rare that I really go all out for a PR but as I made my goal today I felt justified for being solo. There will be many races I run to be with others but there are the occassional challenges I set myself. Today was one of those days and it felt great.

Looking good – my father-in-law running in

The race itself was fun. There was no expo for this race. Packet pickup was from a local running store in South Jersey but seeing as none of us were able to get there we did race day pickiup (as it seems most people did). There was also a walk and a Kids race but as I was running I didn’t get to see how these went. Everyone seemed to have fun and the ability to park in the stadium parking lots, walk up and get your number on the day and check a bag was really convenient. I’d recommend this race for anyone looking for a fun 10K.