At the end of July I made my triathlon comeback. If you recall from last year, I had a ‘slight’ accident during my Half Iron distance triathlon in Williamsburg, VA and as a result I had to pull out of this event last year. As soon as the registration opened up for 2018 I signed up. I wouldn’t say my wife was happy about it but I needed to get back in the saddle…so to speak.

The hardest thing for me going in to this event was my lack of training. Since my accident I had not either gone on a bike or trained in a pool since last July. My main concern was not the bike, I’d just go slower if needed, but training in the pool. My shoulder has not been the same since the incident and still has both an audible and physical pop when I rotate it, so when the first swim training session appeared on my TrainingPeaks app I was a little apprehensive. Fortunately, I survived that and my actual fitness in the pool wasn’t as bad as I thought it may have been. With that said, I stuck very closely to the training plan and was able to maintain and build upon my swimming strength over the next 12 weeks.

That gap certainly did a number on my fitness…well, that and the extra 10 pounds that I put on since last tri season. Oh well. I was committed now and was willing to squeeze everything into the spandex when the time called for it. What was cool about this year though was that my whole family are now riding bikes so I got to do more recreational riding with my wife and my boys.

Race week was rapidly approaching and I was getting excited and eagerly awaiting receiving my race number and final instructions. When I received my confirmation I noticed that it said ‘Aquabike’. Wait a minute? Aquabike? That’s the swim and the bike…but not the run? I quickly went back through my race registration emails and it also said aquabike. Oh no! This was a disaster. After all the build up (in my own mind) for this come back race I seemed to have registered for the wrong event. This is also a race that constantly posts updates about selling out. (Insert audible head slap here!). I emailed the race director only to get their ‘Out of Office’ response. 😦 Ultimately I did get a response which told me to look to speak with them at packet pick up on the weekend to see what could be done.

I was a little concerned when I arrived at the race site on Saturday afternoon. They were just clearing up from the Saturday morning Sprint race. Fortunately the first person I spoke to happened to be the race director. Things were looking up. I explained my predicament, that this was my comeback race, that I had to pull out of last years event from injury and that I messed up (honesty is the best policy, right?) and it didn’t hurt that I was wearing a prior year event shirt and I mentioned the year when they cancelled the event mid race which was supposed to be my first triathlon. Okay, I poured it on a bit. No worries though. She walked me over to the timing table and let me adjust (and pay the extra fee) to upgrade to the Olympic triathlon. Yeah. They moved my number into the right category although I would still be racked and staged with the aquabike athletes. After that, race packet pickup was fine. I just had to swap out my swim cap color now that I was in the corrected event. Once All was taken care of I took a lap around the staging area and merchandise tent to see if there was any fun (or something unique) to buy. Seeing as I had just paid to upgrade my race the wallet stayed in my pocket this time. 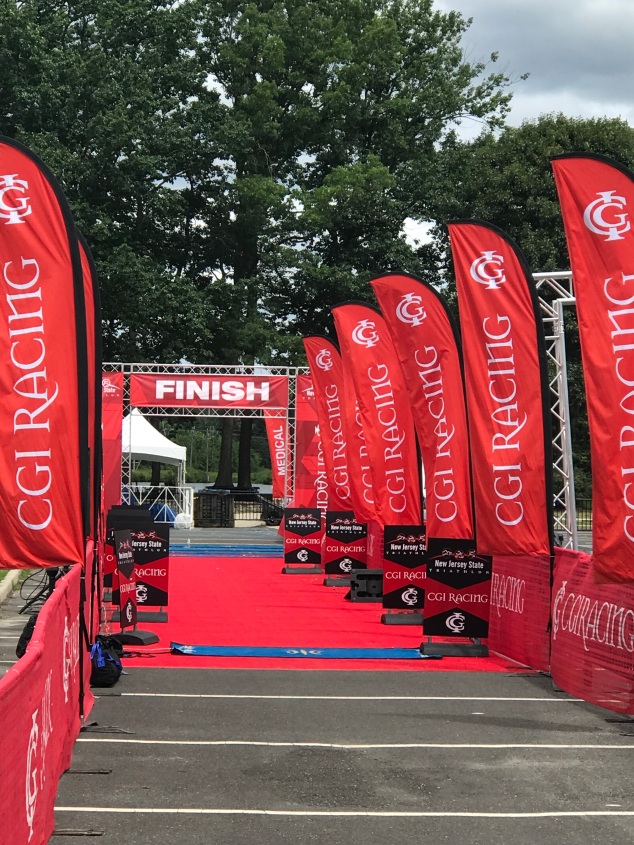 The finish line for tomorrow’s event

The transition area was spacious for the event 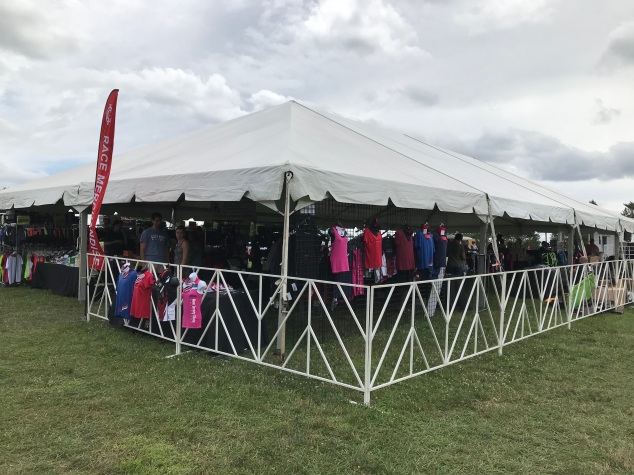 So with everything now settled with the race all I had to do was go home, get my gear together and hope that my training had been enough (and that my confidence was there for the swim and the bike). It was a little surprising then (and not very settling for my nerves) when I got my race packet out to put with my race gear and noticed the name on the bib was not mine!!! Who the heck is ‘Gary’? 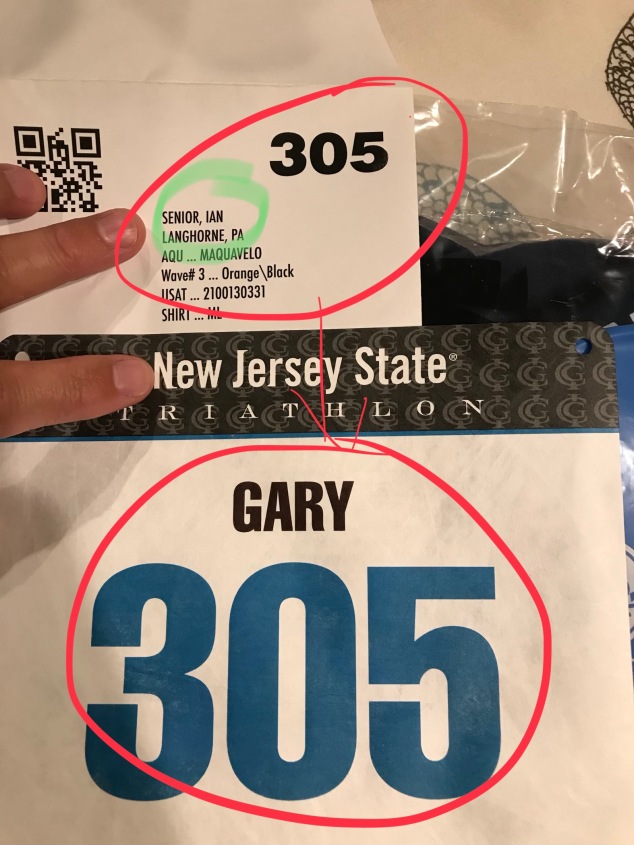 I immediately jumped on to the Facebook page for the event (who doesn’t turn to Facebook for answers?) and before I sent a message to the race team I noticed that many people had experienced the bib name mess up. Phew.  I was not alone. I hadn’t picked up the wrong bib. Okay, if that is the worst that happens I’d be fine the next day.

Usually, this race is extremely hot. The water is usually so warm that wet suits are not allowed. The day is hot and sunny. This year however I woke up to find out that it had rained overnight and it was misty and cool. I arrived at the race site and racked my bike and got my equipment all set up. It had been raining and the ground was soft and damp. I laid my gear out on plastic bags to keep everything dry and packed my socks and shoes inside plastic bags as it was still misty. This was the year that people had wetsuits. I was ill prepared. It was misty and raining. I had sunscreen but no wetsuit. Oops. Anyway, I headed down to the race start by the side of the lake and waited for my wave to get into the water.

Ready for the off

As I was now in the 46-50 age group my wave was much later than it had been in previous years. We were almost one of the last waves out. It was such a big wave that it was broken into 2 groups so I was in the second half as my last name starts with ‘S’. Although apparently my first name is Gary!!! Finally the time to go arrived and I got into the water with everyone else ready for the off. The water was still warm so I was going to be okay without the wet suit.

My goal for this event was to finish (without any embarrassing incidents). My swim was okay. I managed to keep a good line but I was actually faster than my last race in 2016 when I had just finished my first 70.3 race (43 minutes in 2016 vs 40 minutes in 2018). Quite a surprise.

My transition was pretty much a lonely event. As I was racked with the aquabike racers, they had all set off earlier than I had. There was practically no-one around when I was in the transition area where I was set up. That’s at least good as the struggle I endure to put on Injinji socks on damp feet during a triathlon is something no-one needs to see (LOL).

With the swim portion complete it was time for the bike. Did I mention that rain and the mist? Wet roads and slick tires for someone who’s last race ended with a bike fall. Yeah, that was going to to boost my confidence at riding at speed! The transition area was wet and muddy and my cleats were caked in mud by the time I got to the bike mount area. I subsequently slipped while trying to clip in and whacked my ankle bone. Ouch!!! Eventually I was able to clip in and was off. The ride was incident free but I was over cautious especially in the corners. It didn’t help that I saw someone go down and saw an ambulance at the side of the road 😦  This is where I lost a lot of time in the race. In sunny 2016 I did this course in 1:07, this year 1:34. That’s a significant decline in performance. Yes, some could be explained by road surface conditions, but how much was due to nerves. I don’t know but we will see in 2019 (I’ve registered for the correct race this time!!!)

The weather had begun to improve by the end of the bike leg. While the sun wasn’t out as it had been in 2016 (that day was in the 80s) but it was dry and warm. The run was uneventful for me but I saw a couple of people stagger and go down due to the heat. I was tired by the end of the run and my splits definitely declined in the second half of the 10K. I ran this slower than in 2016. I think this was more due to the extra pounds than any else. I ran this in 1:06 vs 59 minutes in 2016.

At least I finished this event without needing a trip to the medical tent. That’s a win. I really like this event. It is well run by CGI racing. They do a great job with all their races that I have participated in (Love Run, Rutgers Unite Half). Slower this time than last time I ran the event, but I will be back in 2019 and will now have something to beat. 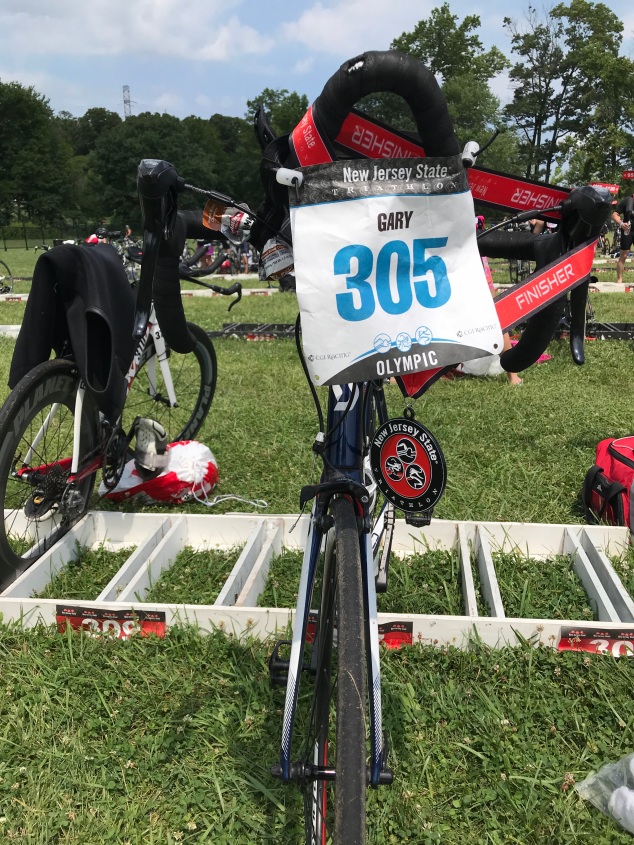