I had the opportunity to take a trip out of town for business last week. The company I work for recently purchased another company in Atlanta and this was my first opportunity to go beyond video conferences and meet everyone in person. I was fortunate that one of my new colleagues was a runner (and a Disney runner too) and she provided me with some tips on places to run before I arrived. Coupled with a few suggestions from other Atlanta based friends I was looking forward to the trip.

My hotel was about 1 mile from Piedmont Park in the midtown area of the city. 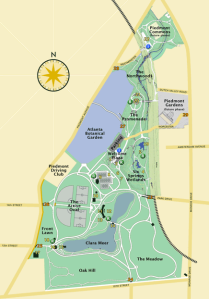 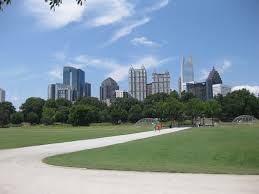 Atlanta skyline from the park

The park was magnificent to run through. The pictures above are not mine as I was running around 5am in the dark. Atlanta was a little hillier than I had anticipated and it was a nice trek to and from the park (a mile each way from the hotel). I ran a slightly different route each day through the park. In all I ran in the park 5 times in 4 days I was there. I tend to run a little more than usual when I travel for work as I tend to eat out more often and I need the calories. I had actually run for the previous 3 days prior to the trip so 8 runs in 7 days finally took its toll and I took the Friday off and slept a little longer.

I finally got the chance to see the park in the daytime for my last run out there. Knowing that I was heading to Atlanta and it being the home of Jeff Galloway I looked into visiting his running store, Phiddipides. I noticed that they had group runs from the store every week so I called up and asked for the details and planned a trip to the store to join in the run.

I got to the store a little early to take a look around and I got to see some of Jeff’s Olympic memorabilia and other souvenirs. I’ve been following Jeff’s training methods since early 2011 and have run all my marathons using his run/walk technique. I was lucky to get to meet Jeff at this year’s Walt Disney World Marathon weekend. I had tried to meet him in 2012 and 2013 but never timed it right at the expo. I figured Jeff wouldn’t be in the store hanging out with his schedule (I was right) but I still managed to end up buying a souvenir Phiddipides t-shirt…I’m such a groupie. 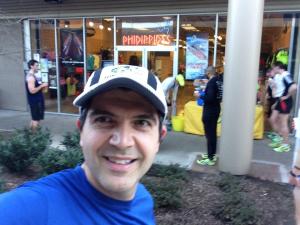 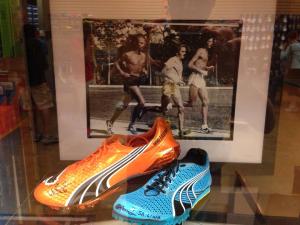 I’m only about 6 weeks or so away from the 2014 New Jersey Marathon and my training is reaching its peak right now in terms of mileage. I was a little over my set mileage last week with all the additional running I did (although I did manage to eat quite a bit) and also had a 20 mile run on Sunday morning following the trip. I have been experiencing a little foot pain with my right foot which was another reason I took a rest day on the Friday. In fact I was a little worried for the long run on Sunday that I actually took my iPhone out with me on the run to listen to podcasts and try and distract myself from any discomfort. I haven’t run with headphones outdoors for over 2 years. I got through the run a little slower than planned and although I didn’t feel too much discomfort it did take a bit of extra effort to get through the run.

With under 6 weeks left of training (and yet another predicted snow storm this week) I am trying to keep my running to the training plan and not do too much extra. I am also going to try out the new Brooks Transcend shoes which are a Stability Plus shoe. They are built on the same shoe last that the Brooks Adrenalines (my usual shoe) are built upon but provide more cushioning and incorporate a new stability technology. We shall see. They do look cool though.

My race calendar is starting to fill up. I haven’t ‘raced’ (or ‘run’) an event since I came back from Walt Disney World. As of today I have 4 races in the next 5 weeks. My schedule is as follows:

As I said in my previous post I am running this year with the ‘Mickey Milers’ charity running team to raise funds for the ‘Give Kids The World Village‘ in Orlando, Florida. Please visit my personal page, take a look at the cause and, if you can, please make a small donation.

Every bit helps. Thank you in advance and thank you for reading.