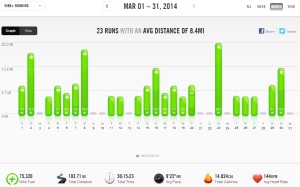 This was my biggest month of training by far since I started running back in 2010. I definitely had a few ‘moments’ this month feeling tired and sore but made a few adjustments to my training and finished the month strong.

Winter was still very much with us as we began the month so I was getting my training runs in on the treadmill at first. This included my longest treadmill run so far of 17 miles. Thankfully I discovered a wonderful (and at least for me) entertaining podcast which took my mind of the task at hand and got me through the run. This was followed up with a quick business trip to Fort Lauderdale, Florida where I took advantage of the warm weather and had a couple of outdoor runs wearing t-shirt and shorts. Needless to say I ran further than planned on those days…I got lost twice and had to use my iPhone Maps to get me back to the hotel. This was then followed by a return to winter….and an 18 mile training run on the treadmill. Ugh!!!

Around mid-March we were fortunate to have some better/warmer weather for a few days and I was able to keep my training on track and for a week I was able to run outdoors in the park where we live. It was great to be back (if a little wrapped up for the weather) and I had some good runs getting used to some proper hills again (there were no hills on my work trip to Fort Lauderdale).

Next up was a business trip to Atlanta, Georgia where I had a good few runs in Piedmont Park and also joined a weekly group run from Jeff Galloway’s Phiddipides store. That was really fun and the weather, although a little chilly earlier in the week, was glorious for my last run out there.

It was during that week that my nagging heel pain started to really bother me. I took a couple of days off but still had a 20 miler to run as part of the training for the upcoming New Jersey Marathon. Since I had to get some physical therapy back in 2011 when I started running I have run with an over the counter shoe insert which acts as an orthotic to support the arch in my foot. It is a really hard/stiff insert and I have been buying a new set for every new pair of running shoes that I bought. I decided to look for something with a more plush heel to see if that would help and I purchase a pair of Brooks Transcend (Brook’s new flagship stability shoe).

While doing some research I looked into reviews for people using orthotics in these shoes. Looking at some of the message boards around I started thinking that the shoes are designed to provide support as needed, perhaps I didn’t need the orthotic in my running shoe as the shoe is design for stability and to provide pronation support. In my everyday shoes (not designed for running) I wear and orthotic with no problem but with the stability shoe was I doubling up on the support? I decided to take a couple of runs without them, although I still ran the 20 miler with the insert in just in case. I actually took out my iPod with me to get me through that run, something I had not done on an outdoor run in almost 3 years just to get me through any discomfort.

I took my first few runs (all 5 milers) wearing the standard insoles that came with the shoe and had no issues. The test would come on the longer distances. As the month closed I ran an 8 miler and raced in the inaugural Philadelphia LOVE RUN all without the orthotic and felt no discomfort. No heel pain during or after the run. I have subsequently returned to wearing my Brooks Adrenaline’s as I feel I don’t need the additional cushioning on the Transcend (and can save $50 on the cost of the shoes vs the Transcend). So I will attempt to continue running with the support designed into the shoe rather than adding an additional overriding support in the shoe. So far, so good.

I ended the month feeling good and set out to run the LOVE RUN half marathon at pace to see how my fitness was going into April and the marathon. Despite the appalling conditions (see here) I actually ran a sensible, comfortable race with a negative split and my feet felt comfortable without the orthotic. I actually ran my second fastest half marathon which also felt good and has given me some confidence going into a busy April.

As the month drew to a close the results of the lottery for the 2014 New York Marathon were announced and neither my wife and I were able to secure a place. We are looking at alternative marathons for this Fall as we will not be able to attend the Philadelphia Marathon this year. Currently we are looking at the Baltimore Marathon or the Atlantic City Marathon (both in October).

On tap for this month in addition to my last 20 mile long run before the marathon taper begins is:

I look forward to improving weather and running outdoors more than indoors in the coming month. April also brings about registration for the 2015 Walt Disney World Marathon. In 2015 I will again be signing up to run with Team Up! with Autism Speaks but this time running the Goofy Challenge and not the Dopey Challenge. My wife also said she would be up for running the Goofy Challenge with me so that will be lots of fun.

In the meantime, I am still running with the ‘Mickey Milers‘ Running Team to raising money for the ‘Give Kids The World’ Village in Orlando, Florida so any support you can offer is greatly appreciated. Here is my personal link.