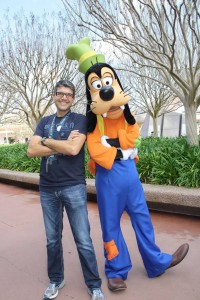 Goofy, yup, that’s me. I am asking for your help and support in raising funds for the ‘Give Kids The World Village’ in Florida. 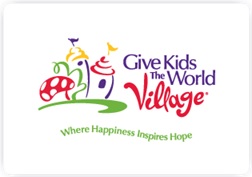 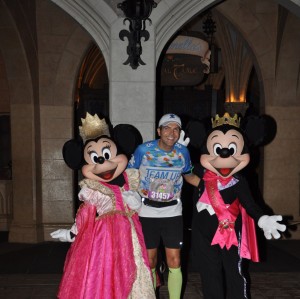 In May 2015 I am planning to undertake my most challenging fundraiser, running the ‘Goofy Challenge’ in just ONE day. Yes, that’s 39.3 miles equivalent to a half and full marathon back to back.

Why do something so completely…well, Goofy? I’ve been inspired by a number of things.

The Village is a 70-acre resort complete with over 144 Villa accommodations, entertainment attractions, whimsical venues, and fun specifically designed for children with special needs. With the help of many generous individuals, corporations and partnering wish-granting organizations, Give Kids The World has welcomed more than 134,000 families from all 50 states and over 75 countries.

I am very fortunate to be blessed by two healthy children. Both my boys are the joy of my life and I am truly thankful for their good health and we have been fortunate enough to be able to take them to Walt Disney World on a number of occasions (while their Mommy and Daddy are off running insane distances in the early hours of the morning). Some families are not as fortunate and with this great cause this will offer those families what may be a once in a lifetime opportunity to take their families to a magical place and with the support of the Village perhaps have the opportunity to also see their children enjoy a very special time with their needs accomodated and escape their daily routine for a short time. 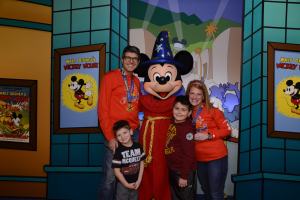 My family with Sorcerer Mickey – January 2015

Secondly, the team has come up in the past with some great fundraising ideas. This year a group is getting together on the same date in August at both Walt Disney World in Florida and at Disneyland in California and they are undertaking the ‘Small World Challenge’ which involves riding the famous 1964 ride over and over (and over) again from park opening to park closing. That’s probably around 14 hours or so listening to that theme. As I am unable to join them in person I was inspired to come up with a challenge that dovetails in with their special day. That is how I came up with the ‘Goofy In A Day’ for ‘Give Kids The World’. So in addition to running that distance in one day I have upped the ante as part of this challenge by promising to only listen to the theme song from the ride for the whole time I am running. 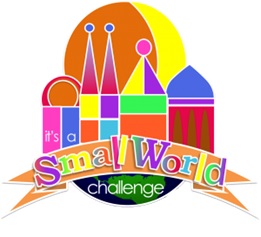 Yes. This is going to be two endurance events in one. Both mind and body are going to be challenged as part of this attempt.

Now, this is not going to be a race against time by any means. Based upon my race times I could achieve this challenge in less than 6 hours…but, since I’ve never run more than 26.2 miles (marathon distance) before my goal is to do what is recommended for an ultra-marathon (distances greater than 26.2 miles). I’m going to start slow…then back off a little. I think I may be able to achieve the total distance in around 7 hours so this is going to be a full day event for me.

I’m hoping to ‘run’ this event on May 18 (rain date May 19) which is just a couple of months away. There are a couple of reasons why I chose this time. I will just be coming from completing the Pittsburgh Marathon in early May so I should be still conditioned to run the long distance. Also, I’m hoping to avoid the heat of the summer. The Small World Challenge is being held in mid-August which is a tough time to run long distance outside. I ran a marathon in mid-August last year, I finished but it wasn’t pretty.

I had a few choices here but my goal was to make this as manageable as possible so I chose the location where my running actually started, my work campus (Vonage Headquarters) in Holmdel, New Jersey.

My Company has always been very supportive of my charity efforts, in fact there is a picture of me running the 2014 Dopey Challenge posted a wall in the cafeteria which highlights all the charitable causes the company supports. 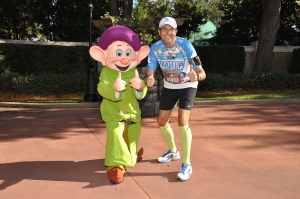 I began running in August 2010 after a little encouragement by colleagues to join the fitness center there. I’ve already written about how I started here but I will always be grateful for the opportunities I have been given here by my company. The campus has a self-contained loop which is about 0.93 miles around (according to my GPS). It is also pretty flat (limited elevation). The campus offers me the opportunity to set up my own aid station (a table) with supplies that I can have within reach. Essentially this is a self-supported run so there are no aid tables or supplies as would be in on an organized course. The campus circuit allows me the ability to manage my water and fuel supplies as well as give me access to bathrooms as needed. 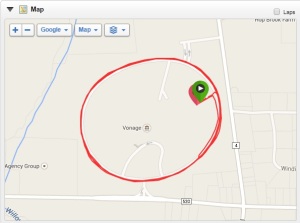 Little to no elevation

My other choices were 5 times running an 8 mile loop in Philadelphia where I ran the Midnight Madness race in July 2014. While flat this offers challenges with parking and maintaining supplies of fuel and water, or running in Tyler Park nearby my house which has a 5 mile loop which I would run 8 times however this has much elevation which would make this more of an effort…I still want to be standing when I finish. 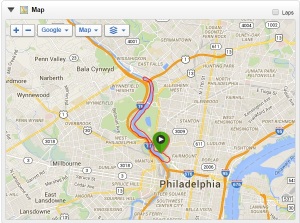 Little elevation but not great logisitically 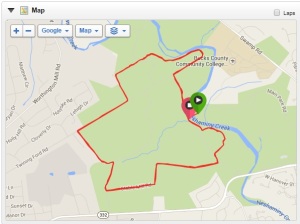 Well, I feel a certain kinship with the running group. They are such a strong team of supporting everyone in their goals whatever their ability. Really a great bunch of people. I’ve had the pleasure of meeting up with many of them outside of Walt Disney World at other races, for a run when I am out of town and even just socially. They all have such ideas for raising funds for this cause and the best part of this group is the collective fun we have doing it.

I’m also inspired by many of the runners in the group. Whether they know it or not, even though many people tell me how impressed they have been with my endeavors, I am more than inspired by their efforts. In fact, I’m not the first to do the ‘Goofy In A Day’ idea (see how my team mates ran a marathon in one State in the morning and a half marathon in the evening in another State) but I may be the first in the group to do it all in one go!!!

I’ve done many ‘Goofy’ things as a runner (I’ve been known to get up at 2:30 am and run 22 miles during a bachelor party weekend, or run 20 miles before work one day) but my goal has always been to maintain a new found level of fitness, to be a good example for my two boys and to make my miles count for others. I am therefore asking for your support in helping me achieve this crazy challenge.

Please visit my fundraising page here and show your support. I would be most grateful if you could share this with your friends too given the short window of fundraising for this. I have no ultimate goal for this but if we can send just one family to the Give Kids The World Village it will have been worth it. (Note – this link may update as the Team Page updates so I will make sure to keep it current as changes happen).

By the way, here is the math:

The official album for Walt Disney World lists ‘It’s A Small World’ at around 5 minutes long so it would repeat 12 times an hour. If I’m estimating this will take me 7 hours that would be 84 times listening to the same tune…THAT tune. 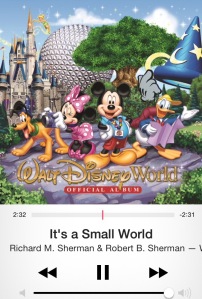 I’m not asking anyone to join me…I don’t think anyone would volunteer(!) but hopefully I’ll complete the challenge and raise a good amount of funds in the process.

Thank you in advance. 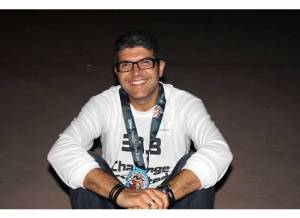 January 11, 2013 – relaxing the night before my first Goofy Challenge